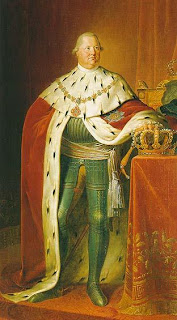 Frederick I is known for being the first King of Wurttemberg and for being extremely large (he was nearly 7 feet tall and weighed over 400 pounds!). He was the nephew of Duke Charles Eugene of Wurttemberg whose reckless spending and wars had left the country divided, relatively poor and quite volatile. His father had purposely raised him as a Protestant so that he would share the religion of the majority of his future subjects (the previous dukes of Wurttemberg had been Catholic). Expected to inherit the throne steps were taken to see that he would be prepared for the job. Empress Catherine II of Russia made him governor-general of eastern Finland from Viipuri. In 1797 he succeeded his short-reigning father as Duke Frederick III of Wurttemberg but within 3 years was forced to flee to Vienna by after the French invaded.

Frederick signed his own secret peace with France and was raised to the status of a Prince-Elector in the formal peace that followed. Later, when he agreed to provide troops to aid the French the Emperor Napoleon had him elevated to the status of King of Wurttemberg. The country left the Holy Roman Empire to join the French-backed Confederation of the Rhine and Frederick even had his daughter Catherine married to Napoleon's brother Jerome. This match likely did not go over well in London with Frederick's father-in-law, King George III of Britain. During the French war against Russia the Wurttemberg troops earned a high reputation for their discipline and tenacity, their few survivors being the only soldiers marching in perfect formation on the horrific retreat from Moscow.
A very pragmatic ruler, Frederick turned on his former French allies during the War of Liberation of 1813, playing up his British family ties, and was rewarded at the Congress of Vienna by having his kingship confirmed by the more established powers of Europe. The alliance with France had truly been one of forced necessity and neither Frederick nor Napoleon had very many kind things to say about the other. In political terms his reign was a great success seeing Wurttemberg fight on the losing side, emerge on the winning side and raised to the status of a kingdom. In private he was much less of a success. His marriage to Duchess Augusta of Brunswick was an unhappy one and many rumors spread about Frederick, from accusations of homosexuality to being abusive toward his wife. They had 2 sons and 2 daughters before Augusta's death in 1788. Frederick later married the Princess Royal of Great Britain but had only one daughter who was born dead. The massive monarch died in 1816, one year after joining the German Confederation.
Posted by MadMonarchist at 1:59 AM