The Latest from Luxembourg 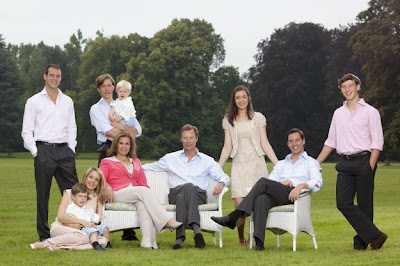 The Grand Ducal Family of Luxembourg has passed a few milestones lately. October 7th marked the ninth anniversary of Grand Duke Henri's accession to the Luxembourg throne. They marked the occasion with the release of a new set of family photos, group and individual, in formal and informal attire, showing off again that the Grand Ducal Family are obvious winners in the genetic lottery. The photos can be see on the Luxembourg monarchy's website here. These were the first family photos to include Princess Tessy, the wife of Prince Louis, and the couple’s two sons, Gabriel and Noah. On October 9th TRH Prince Guillaume and Princess Sibilla of Luxembourg were in Monaco for the European Organization for the Research and Treatment of Cancer gala hosted by HSH Prince Albert II (covered on Mad for Monaco). Yesterday, HRH Grand Duke Henri of Luxembourg along with his son and heir Hereditary Grand Duke Guillaume hosted a reception at the Grand Ducal Palace following the ceremonious opening of the Chamber of Deputies for Luxembourg's new political term. Ordinarily Grand Duchess María Teresa would have attended but is still taking it easy after having surgery early last month.
Posted by MadMonarchist at 1:41 PM