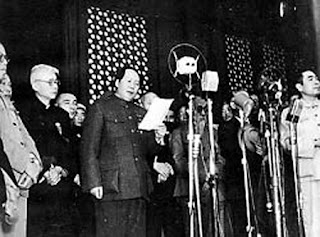 Sixty years ago today Chairman Mao Zedong, leader of the communist revolution, proclaimed the birth of the People's Republic of China in Beijing following the defeat of the Kuomintang forces of the Republic of China who were forced off the mainland onto the island of Taiwan. It was a day of triumph for the twisted doctrine of Marxism in China but also a day to pervert monarchial symbolism that still lingered in a country that had lived under the imperial system for thousands of years. Mao made the statement from the Tiananmen Gate or "Gate of Heavenly Peace", the main entrance to the Imperial City within which stands the Forbidden City. He also used imperial terminology when he announced that "the world", meaning China, had "stood up". This was a throw-back to the era when the Chinese considered their empire to be the center of the earth and their emperor, as the Tien Su or Son of Heaven, was the ruler of the world even if a few barbarian fringes (basically everyone else) did not recognize it. He was then cheered by crowds using the traditional imperial cheer for long life, "10,000 Years!"

This was not the only time or the only way that the imperial past continued to haunt Communist China. On one occasion when a formal reception was to be held Mao's wife had a dress made for herself that was basically a copy of the gown of a Chinese empress. She was later prevailed upon not to wear it. Ironically enough this was the same woman who launched the career of Joan Chen who would go on to star in the film "The Last Emperor" as Empress Wan Jung. Mao was also quite fanatical about claiming for his regime all of the territories of what had been the Chinese Empire. He managed to grab Tibet but was thwarted from taking back Outer Mongolia when the Soviets occupied the region though he continued to include Mongolia as well as Taiwan in the list of the territories and regions of the People's Republic of China. All of this was only one aspect of the selective hypocrisy of the communist regime.

For example, they could be kind toward figures from the imperial past if it served their purposes. For example, it was finally decided that the famous first Emperor of China (Qin Shi Huang Di) was an acceptable figure to remember. He was just far enough back in history to be considered "safe" (reigning from 221 to 210 BC) and was known for having abolished feudalism, centralizing power, burning books, executing scholars and ruling through the doctrine of legalism which essentially said that the law is supreme, might makes right and individuals have no personal freedom. They also built a pseudo-religion around the dictator Mao himself; the same man who famously told the 14th Dalai Lama of Tibet that, "all religion is poison". This campaign went to such extremes that on one occasion when a mine shaft collapsed with a miner inside, when the shaft was dug out the dead man was found clutching his copy of Mao's "little red book" to his chest for protection.

There will be massive celebrations, military parades and fireworks displays in China today and other places (one discussed earlier) around the world have gotten in on the act as well. However, the world should not forget what this day in history meant; what the victory of the communist revolutionaries meant. It meant the enslavement of the Chinese, the invasion and brutalization of Tibet, the near extermination of various ethnic groups, the deaths of millions on a scale never before seen in the history of the world with the "Great Leap Forward" and the "Cultural Revolution". The body count has been estimated at 45 million, 60 million to even 100 million. And, make no mistake about it, the oppression and bloodshed continues to this day. Books are banned, websites blocked by the "Great Chinese firewall" that are deemed counterrevolutionary, praying in a non-approved church will earn you a free trip to a "reform through labor" camp and displaying a Tibetan flag could get you shot. Celebrating the birth of the People's Republic of China would be like celebrating the birth of Nazi Germany; except for the fact that Mao Zedong killed far more people than Adolf Hitler was ever able to. Consider that the next time anyone speaks of the Red Chinese as just another friendly trading partner.
Posted by MadMonarchist at 2:58 AM