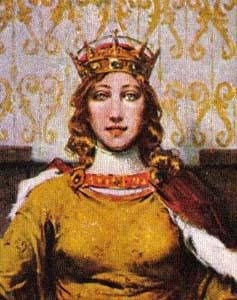 Queen Leonor of Viseu was the consort of King Joao II of Portugal and quite a remarkable woman. The Infanta Leonor was born on May 2, 1458 to Infante Fernando, Duke of Viseu and his wife Beatrice of Portugal. Her maternal grandfather was Afonso, first Duke of Braganza. In January of 1471 the 13-year-old Leonor was married to the 16-year-old Joao Prince of Portugal, heir to throne as the only living son of King Afonso V. In 1475 Leonor gave birth to the first of her only two children, Prince Afonso, who was sadly later to die a premature death in a horse-riding accident in 1491. In 1482 she gave birth to another son, named after his father, but he did not survive.
On August 28, 1481 King Afonso V died and Leonor’s husband became King Joao II of Portugal. The new king was widely unpopular amongst the nobles as he sought to curtail their power and centralize government authority. Part of this was because of the many schemes and court intrigues that naturally tended to hatch from the nobility. No one could say that Queen Leonor had any undue influence on her husband in his zeal to wipe out corruption in the nobility. Her older brother, Duke Diogo of Viseu and her brother-in-law Duke Fernando II of Braganza were both executed by her husband after being linked to a treasonous plot against him. This campaign of the Crown against the nobility almost wiped out the house of Braganza (which might have seriously changed Portuguese history had it happened).
One of the things the Queen is most known for is her foundation of the city of Caldas da Rainha which was named after her. She was greatly troubled by the conspiracies that surrounded her husband and when he died on October 25, 1495 there were rumors that he had been poisoned. His reign had been an eventful one, fraught with conflict but also one which saw the elevation of Prince Henry the Navigator and a renewal of exploration that laid the foundations of the future Portuguese empire. In his absence Queen Leonor devoted herself to the Church and charitable works. Her brother became King Manuel I and she established, in 1498, the Holy Houses of Mercy which worked to relieve the suffering of the poor, the diseased, abandoned children and orphans. Thanks to her, the Holy Houses of Mercy later sprang up across the world in Portuguese colonies making Queen Leonor the founder of an empire of compassion just as impressive if not moreso than that of her late husband.
Posted by MadMonarchist at 1:10 AM