The Battle of Gonzales, Texas 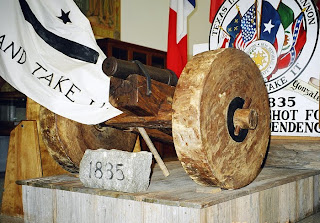 Today is the anniversary of the "Lexington of the West", the battle of Gonzales in 1835, the first formal exchange of hostilities of the War for Texas Independence. Tensions had been growing for some time and things became particularly heated when the dictator of Mexico, Generalissimo Antonio Lopez de Santa Anna (the turncoat who had betrayed and deposed the Mexican Emperor) garrisoned Texas with an army of convict-soldiers led by his brother-in-law General Martin Perfecto de Cos. Hostilities were set when Colonel Domingo de Ugartechea dispatched 100 dragoons under Francisco de Castaneda to confiscate the canon at Gonzales which had been given to the settlers to fend off Indian attacks. The small canon suddenly gained great symbolic significance and the Texans decided to draw the line at Gonzales and refuse to allow the government to disarm them. Colonel John H. Moore led about 140 militiamen with their canon to confront the Mexican dragoons and flew a defiant flag bearing a lone star, an image of the canon and the phrase, "Come and Take It".

A barking dog startled the Mexican soldiers who opened fire on the Texans but the Mexicans were confused by a thick fog which prevented them from knowing where or how numerous their enemies were. Moore had earlier tried to negotiate with the Mexican captain, informing him that they no longer recognized the authority of the regime of Santa Anna but remained loyal to the Mexican constitution of 1824 which Santa Anna had tore up when he assumed dictatorial power. After a short, sharp skirmish the Mexicans withdrew back to San Antonio. Only one Mexican was killed and one Texan wounded but it was the start of a war that would change the face of North America and determine the future of the entire American southwest.
Posted by MadMonarchist at 3:37 PM