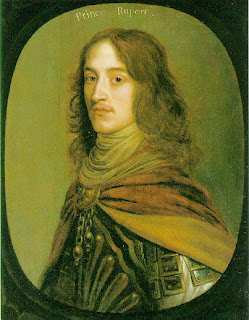 Prince Rupert, Count Palatine of the Rhine, had a very diverse and colorful career though he is most known for commanding the royalist cavalry during the English Civil War. However, he was also an inventor, an artist, a businessman and even something of a pirate. Prince Rupert was born in Prague during the 30 Year War but grew up in the Netherlands after the conflict forced his family out of Bohemia. He was a grandson of the Stuart King James VI & I and a nephew of King Charles I. Prince Rupert took to soldiering early on, first fighting with the Dutch against the Spanish. He later fought for the Protestant alliance in the 30 Years War.

In 1642, at the age of only 23, he went to England to fight for his uncle Charles and was given command of the royalist cavalry. He cut a dashing, though somewhat bizarre figure with his flamboyant clothes, long hair and his pet poodle trotting alongside him. The roundheads of Parliament called him the “Mad Cavalier” and believed his dog was bewitched, though their fears were relieved when the poodle was killed at the battle of Marston Moor. As a cavalry commander Prince Rupert was definitely bold, brave and daring but like many with those qualities he often seemed to lack sober common sense and foresight.

At the battle of Edgehill Prince Rupert rode off half-cocked and left the royalist forces vulnerable and they were defeated. The Mad Cavalier was blamed for this but he also urged an immediate follow-up attack on the Earl of Essex which might have all but won them the war but his advice was not followed. Prince Rupert also showed his ability in taking Bristol, relieving Newark and York and led the attack on Liverpool. However, the defeat at Marston Moor hurt his image and many thought it a mistake when King Charles made him his top general. The Mad Cavalier’s victory at Leicester helped but was followed by the terrible defeat at Naseby.

With that, Prince Rupert gave up all hope of victory and advised the King to sue for peace. Charles refused and when Prince Rupert surrendered Bristol to Parliament he was dismissed and left the country. After that he fought with English exiles in the French army, raided Cromwellian English ships in the Caribbean. His exploits as a pirate must have served him well for after the restoration he was made an admiral and won some great victories for England in the Second Anglo-Dutch War. However, again, he did not fare so well in a third war against the Dutch. In 1670 he was made the first Governor of the Hudson’s Bay Company. He continued to dabble in art and inventing and held several high offices before his death in 1682.
Posted by MadMonarchist at 1:02 AM