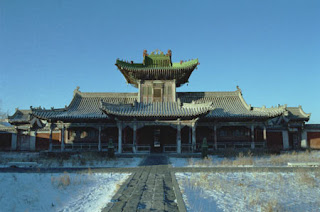 Continuing north from our last destination, any trip to the remote Republic of Mongolia will be incomplete for the modern monarchist without a visit to the Winter Palace of the Bogd Khan, Mongolia's last monarch. Head to Ulanbator and go south toward Zaisan and you will find the palace complex. Built in very traditionally east Asian style, the ornate gates and walls surround a number of temples as well as the Bogd Khan's actual residence, a two-story house built in a combination of eastern and western styles. The Holy Emperor actually had four palaces back in his time but the Winter Palace is the only one to survive the communist regime that followed him. It was a much more mysterious and haunting place in the past when it remained largely forgotten by the world, with everything left largely untouched from when the Bogd Khan had resided there. Today, sadly, it is more regulated, operates as a museum and is marketed as a tourist attraction.
The palace contains many relics of the last monarchial era in Mongolia, which speaks to the sacred nature of the sight to the Mongols of old since it was only in recent years that there was any security at all for the sight. In the Khan's day the rooms of the palace were filled with his many collections. Silk banners hung on the wall and one room would be filled with clocks, another with pianos, others with other assorted mechanisms, music boxes, magazines and such as well as an extensive collection of stuffed animals including a Russian bear, penguins and even a large crocodile hanging from the rafters. Most of these items are still on hand as is the Khan's ceremonial throne, his elaborate (but largely ceremonial) yurt, a pair of boots given to him by Czar Nicholas II of Russia. Probably the best thing about it (as with many of the places covered here) is the mysterious atmosphere of the place, being off the beaten path, not quite tourist-saturated and the feeling that you are exploring an old abandoned house out in the country. The *feeling* of the visit is as great if not greater than the things you will see when visiting. 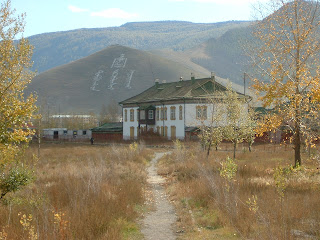 Posted by MadMonarchist at 2:51 AM