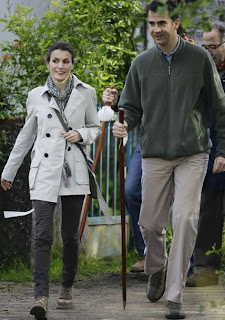 Last Thursday TRH Prince Felipe and Princess Letizia of the Asturias participated in a time-honored Spanish tradition; walking the Camino de Santiago in Galicia to the Cathedral of Santiago de Compostela. This was once one of the most famous places of pilgrimage in the world, and still is for Roman Catholics though of course it is not like it was in the era of the height of Christendom. Of course with these two pilgrims the media followed them every step of the way. Upon arriving at the cathedral they met people in the crowd before going inside to embrace the statue of St James, took some time to reflect before his relics and then heard mass.

This is the sort of thing that I love to see, especially in this day and age when secularism is so rampant. Royal-religious occasions do remain; I think of Queen Elizabeth II on Maundy Thursday, the Prince of Monaco on St Devote day and the like but it seems that such events are few and far between these days, especially in the Christian -or formerly Christian- world. The Emperor of Japan still participates in certain Shinto rites and the Kings of Thailand and Cambodia preside at important Buddhist ceremonies but even in that part of the world, with the fall of monarchies, many of these religious customs have gone extinct. The communist rulers of China and Vietnam may now go through the steps of copying what the emperors once did, going to the Altar of Heaven to make offerings on behalf of the nation -but it is nothing more than play-acting and everyone sees it as such.

If anyone would like to leave a comment on some important religious occasion which modern day royals participate in, whether reigning or non-reigning royals, I (and I'm sure all readers) would be glad to hear about them.
Posted by MadMonarchist at 12:30 AM