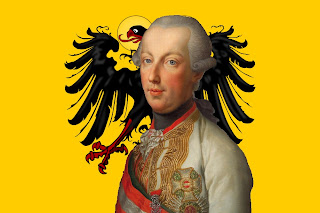 Known as one of Europe's "Enlightened Despots" was Joseph Benedict Augustus John Anthony Michael Adam von Habsburg-Lothringen. The son of Maria Theresa, over whom the War of Austrian Succession was fought, Joseph II broke with the devoutly Catholic policies of his mother to embrace the sweeping trend of the so-called "Enlightenment" which viewed traditional Europe as a place of injustice and intolerance. In fact, of all the so-called "Enlightened Despots", Joseph II was the only one not to be titled "the Great" despite the fact that he certainly lived up to the ideals to an infinitely greater degree than many others who were. His reign saw an increase in the German culture, Austrian dignity, and unheard of advances in social and religious toleration. In many ways he was a monarch years ahead of his time. Yet, his reign also saw the destruction of many of the core Catholic principles which had held the Holy Roman Empire together for a long time. I tend to think some Catholic writers have been rather too hard on Joseph II, but there is no doubt that he was not a friend of the favored position of the Church in Austria.
After the death of his father Joseph became, in name at least, Emperor of the Romans, King of Germany, Jerusalem, Hungary and Bohemia, Archduke of Austria, Grand Prince of Transylvania, Grand Duke of Tuscany, etc, etc. However it was not until the death of his mother that he became absolute ruler of Austria. Upon his ascension he gave his large inheritance to ease the national debt and ordered his brother to do likewise. He cut government spending, built the first truly public parks, charged the Church with caring for the sick and destitute and granted religious toleration to Jews and Protestants. He abolished such traditional Catholic devotions as the Rosary and religious processions, expelled the Jesuits and seized a great deal of Church property. Yet, throughout his reign, whether in Vienna or on the battlefield, he heard mass every morning and was an enemy of Protestant Prussia (though both monarchs had a great deal of respect for the other's abilities). It was under Joseph II that Wolfgang Mozart rose to fame, though his music was a little too extravagant for the very simple Joseph. Nevertheless his support of Mozart & his contemporaries earned Joseph the nickname, "The Musical King".
This taste in music corresponded with the rest of his reign, whether religious or political. He was very German, he favored always simplicity and efficiency. It was said that his poor houses and government buildings looked like army barracks. He himself usually wore a military uniform rather than the latest fashions and he despised court ceremony and lavish Church rituals. The fact that his cold relationship with the Church would probably not be so notable were it not for the fact that he was the Holy Roman Emperor, and the son of Maria Theresa, expected to be the Church's first defender. However, he was often disdainful of the ecclesiastical leadership, just as he was of the elites of society, whom he saw as contributing nothing to the good of the nation.
For all of these things Joseph was adored by the common folk but despised by the aristocracy and high clergy. Certainly the Emperor had his share of heartaches and trouble. His beloved first wife died early on and Joseph never recovered from the loss. Victory over Prussia's Frederick the Great constantly escaped him and his sister was the famous Marie Antoinette who was murdered by French revolutionaries. In the royal community of Europe, most of whom were also adherents of the "Enlightenment", Joseph was consistently held in very high regard. Czarina Catherine the Great of Russia was greatly impressed with the young monarch who oddly insisted on wearing an Austrian army uniform rather than lavish costumes, and Prussia's Frederick the Great never ceased to express his admiration for Joseph even when they faced each other in battle. In fact, it was partly the high esteem in which Joseph held the Prussian king that led to his desire to emulate his victories in the field.
Emperor Joseph viewed it as his duty, as an absolute monarch, to protect and serve his nation and all of his people, regardless of their religion or class. He was beloved by his people, but, perhaps unwittingly, removed some of the key supports of his empire. Yet, in the sense of helping the common people of his country, setting aside his anti-Church policies, he was probably the only "Enlightened Despot" who actually did improve the lives of his subjects.
Posted by MadMonarchist at 1:12 AM