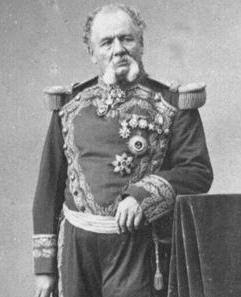 Adrian Woll was born on December 2, 1795 in St Germain-en-Laye near Paris and at an early age embarked on the military career that was to see him serve numerous governments in three countries on two continents. His first service was as a lieutenant in the Imperial Guard lancers of the Emperor Napoleon. After rising to the rank of captain he went to America when the Bourbon monarchy was restored in France. Introduced to famed General Winfield Scott of the US Army he served with a reduced rank for a short time before Scott pointed him in the direction of Mexico as being a place better suited to soldier of his background and ambition. So, in 1816 he joined the staff of the revolutionary Spanish General Francisco Xavier Mina with the rank of lieutenant colonel.

He went with Mina to Mexico and stayed after his expedition failed and joined the Mexican forces Antonio Lopez de Santa Anna in the Mexican War of Independence. In time he became a Mexican citizen and married a local girl named Lucinda Vautrey Griggi. In 1828 he was promoted to colonel and served as an aid to Santa Anna at the capture of Tampico from the Spanish in 1829 -the act more than any other that secured Santa Anna’s rise to power. Woll’s star continued to rise and in 1832 was promoted to brigadier general and awarded the Cross of Tampico. That same year he participated in the coup against conservative president Anastasio Bustamante and his victory at Taxinastla helped place another general, M. Gomez Pedraza, in the presidency. When Santa Anna came to power he knew General Woll as a man he could trust and in 1835 he served as quartermaster-general in the army Santa Anna used to crush the federalist rebellion in Zacatecas.

General Woll held that same position the following year in the Mexican Army of Operations in Texas which Santa Anna organized to enforce his rule there. He was not present at the Alamo, reaching San Antonio two days after the mission-fortress had fallen. Santa Anna’s second-in-command, the Italian-born General Vicente Filisola, assigned Woll to General Joaquin Ramirez y Sesma who was to take 725 men, 2 cannon and 40 dragoons to pursue the Texas army and government that was retreating through the colonies toward the Louisiana border. Santa Anna went on to epic defeat at the battle of San Jacinto (blaming the absence of Filisola for the loss rather than his own inept overconfidence). Woll became chief-of-staff to Filisola who took command of the army following Santa Anna’s capture. Woll was taken prisoner by the Texans but later released at Goliad after which he rejoined the army on the retreat back to Mexico. Speaking of Goliad, General Woll claimed later that he had persuaded Santa Anna to rescind his order to execute the hundreds of Texan prisoners there but that the new instructions did not arrive until the massacre had been carried out.

In terms of the army Woll’s career had suffered something of a setback by the failed war in Texas and two years later when the “Pastry War” broke out with France Woll resigned rather than fight against his countrymen. However, the Mexican government refused to accept his resignation. Afterwards he joined his old chief Santa Anna again in the on-again-off-again war between the centralists and federalists. Later posted to the northern border he was ordered to lead another Mexican invasion of Texas in 1842. There had been other incursions into the Republic of Texas but not got so far as the forces of General Adrian Woll who captured San Antonio and marched along the Guadalupe River to Gonzales in a single month. He returned to San Antonio on September 11 but was defeated at the battle of Salado Creek on the 18th. Two days later he evacuated San Antonio and returned to Mexico. Texas celebrated the defeat of the Mexican invasion but in Mexico the campaign was termed a ‘punitive expedition’ and declared a victory as well with General Woll being wildly celebrated, given the Cross of Honor and promoted to major general. His fall from grace came only a few years later though in 1844 when he joined another military revolt, this time against Santa Anna, for which he spent the most of a year in prison.

When war with the United States broke out, General Woll served Santa Anna again until the final defeat after which he went to Europe and then to Cuba where he joined his old commander in returning to Mexico. Santa Anna made Woll a governor but when he again assumed dictatorial power, and was again overthrown, Woll had to go as well. Several years later though, he was back, this time supportive the young conservative (and future monarchist) Miguel Miramon in the so-called Wars of Reform. He won a number of victories, showing his old talent, taking Zacatecas and successfully defending Guadalajara from the liberals. However, the conservatives finally lost, Benito Juarez became president and Woll went home to France. His next chance for action came in 1862 when the French Emperor Napoleon III declared war on Benito Juarez and invaded Mexico. It must have seemed like his life had come full circle. Woll was again serving a French Emperor named Napoleon and going back to Mexico, this time with the French Imperial Army.

After the arrival of the French forces, who were joined and supported by the Mexican conservative-clerical party, General Woll was named commandant general of the state of Vera Cruz. In this capacity he had dealings with the local Confederate agent, A. Superviele, who urged the French to take the border city of Matamoros, across the river from Brownsville, Texas which would open up trade that would benefit the French cause in Mexico and the Confederacy. That job done, Woll also served on the Superior Junta organized by the French to organize the provisional government that would eventually call for the restoration of the Mexican monarchy. Adrian Woll was dispatched with the official delegation that invited Archduke Maximilian of Austria to become their Emperor and after Maximilian accepted he was asked by the young monarch to draw up plans for the organization of the Imperial Mexican Army.

When Emperor Maximilian arrived in Mexico he assigned Adrian Woll the post of adjutant general of the army and chief aide-de-camp. He was also decorated with the Legion of Honor. He carried on in this capacity until the fall of 1865 when Maximilian, who was frequently at odds with the French commander Francois Achille Bazaine, dispatched Woll to Paris to explain to Napoleon why his marshal needed to go. It was only upon arriving that General Woll learned that Napoleon III was abandoning Maximilian and preparing to evacuate all French troops from Mexico. Seeing no future for himself in his adopted country, and being a fairly old man by this point, Adrian Woll remained in France and never saw Mexico again. He died at Montauban, north of Toulouse in the south of France in February of 1875.
Posted by MadMonarchist at 12:23 AM