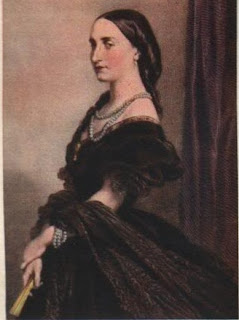 Carlota arrived in France on August 8, 1866 and it seemed that the French Emperor was somewhat intimidated by the idea of facing her and he sent a telegram claiming to be ill and regretting that he could not receive her. Carlota refused to be dismissed though and she went on to Paris, lodging at the Grand Hotel where she was met by Empress Eugenie. Once again, it was these two women, the most devoted to the cause of Mexico, who worked things out and with the help of Empress Eugenie, Carlota was able to obtain an audience with Napoleon III. She came at him with all guns blazing, reminding him of his obligations, pointing out that the republican insurgency had been on the verge of collapse when he ordered his forces to withdraw. How could he abandon her husband now after so many lives and fortunes had been spent on the Mexican campaign? However, Napoleon III refused to give in, and hid behind his ministers who were advising him to give up on Mexico. Carlota began to break down, she had taken an incredible weight on her shoulders, holding herself responsible for working a miracle with the French, but Napoleon was intransigent. At their second meeting she became enraged at the French betrayal and broke down in hysteric sobs. When they met for a third time Napoleon reiterated that he was finished with Mexico and that decision was absolute and final. Carlota went to pieces.

She wrote to her husband that Napoleon III was "possessed by the devil" and stood for "the evil on earth". On the way to Trieste she became paranoid, ordering the coachmen to go as fast as he could, constantly covering her face with a handkerchief and fearing that a farmer they passed on the way was an assassin sent to kill her. When she arrived at their old home of Miramar there was a message from Maximilian asking her to go to the Pope for help. He had no idea that his wife was on the edge of a total nervous breakdown, but nonetheless she went to Rome and met with Pope Pius IX. The visit did not go well. Overcome with paranoia and despair, she rushed into the papal apartments, threw herself at the feet of the pontiff hysterically claiming that everyone was trying to poison her, that her food was tainted and she was starving for fear of eating anything. She tasted some chocolate milk the Pope was drinking with her finger, and asked to stay in the Vatican where she would be safe. The confused and concerned pontiff had a bed put in the library for her and Empress Carlota became the only woman to ever stay overnight in the Vatican.

Her condition continued to deteriorate, yet she was able to control herself on occasion. The mother superior of a local convent took her to visit some orphans, and though she made the trip with her handkerchief held over her face, she was her usual, charming self when it came to her royal duties and she spoke to the children perfectly well. Yet, it did not last, and while touring the kitchen she tried to snatch up a cooking piece of meat, burned herself and fainted. When she was taken back to her hotel it was discovered that she had live chickens tied to the legs of her table and had insisted that her attendants kill, clean and cook them as she watched to make sure no poison was slipped in. While out in public she took a glass from the Pope and used it to drink from a fountain. As soon as her family in Belgium found out about these activities they were naturally extremely concerned and sent her brother, Prince Philip, to escort her back to Miramar. Once there she was the responsibility of the Hapsburgs and no one was allowed to visit her. Doctors were brought in who observed her condition and quickly pronounced her insane.

After having a little peace and quiet in familiar surroundings, Carlota's condition began to improve, at least as far as her health and appearance were concerned. Mentally, she remained bewildered and unstable. She was not invited to Philip's marriage in May and while she remained shut away reading and writing letters her absence prompted many rumors and gossip. The most common one was that she had been pregnant when she left Mexico with the illegitimate child of Baron Van der Smissen and gave birth to a son in 1867 who some later claimed was Maxime Weygand. Even some more modern writers have spread the story, but the rumors simply don't add up. Not only would such an affair have been totally out of character but the notes of her doctor at Miramar showed that she never missed a period and was certainly not pregnant. Carlota was totally devoted to her husband and in fact would likely not have had such emotional trauma if she had not been.
Posted by MadMonarchist at 12:46 AM