60 Years for the Lord of Life 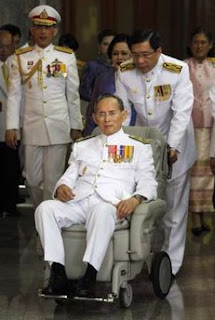 Yesterday HM King Bhumibol Adulyadej of Thailand made a rare public appearance during the celebration of his 60th anniversary as King of Thailand. Expressions of loyalty were great and widespread, from the streets to internet social networking sites. The King attended a Buddhist ceremony in the Royal Palace with top government officials and was given a 63 gun salute before returning to the hospital admist huge crowds of loyal Thais shouting 'long live the king'!

The occasion was an opportunity for red and yellow shirts to put aside their differences for a day and the red shirts were quick to express their loyalty and protest at the accusations made by others that their victory would imperil the Thai monarchy. That is really nothing new and I tend to think that 'they doth protest too much'. There is, after all, a reason why the red shirts are accused of disloyalty to the monarchy but the yellow shirts are not (see a short run-down on the differences here). It is worth noting that, around the world, it is the most anti-monarchy radical leftists and communists who speak with the most glowing support of the red shirts.

The red shirts, regardless of the feelings of the rank and file, are putting the monarchy in danger simply by their actions that are de-stabilizing the country. Should the situation get out of hand and lead to outright conflict it would mean that either the military puts down the reds and total power is held by a general or if the reds win it would mean that total power would be in the hands of a left-wing populist, either one of which could decide to discard the monarchy when the current king dies. Pol Pot pretended to be loyal to the King in Cambodia too but once firmly in control he abolished the monarchy. As I recently pointed out, in Mongolia the communists came to power professing loyalty to the Bogd Khan but upon his death ended the monarchy. So, no matter what most of the red-shirts in Thailand think about the monarchy, by causing chaos they are at the very least helping to create an opportunity for someone more extreme and more republican to step in, take power and destroy what has been (alongside Malaysia) the shining example of monarchial success in Southeast Asia.
Posted by MadMonarchist at 2:47 AM