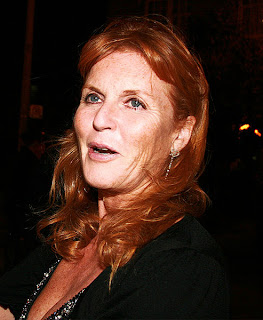 Today Sarah Ferguson, Duchess of York, is supposed to be on her way to Los Angeles, California to "accept an award for her charity work". Rather ironic considering that it has just come out that "Fergie"was caught on tape accepting a $57,000 downpayment of a whopping $720,000 bribe to buy access to her husband, HRH Prince Andrew, Duke of York. You can read the details at the link provided but I would just like to say that I've never been a very big fan of Fergie but this surprised even me. I wonder what all of those who think HM the Queen was cold and unkind toward Fergie are thinking now? Perhaps Her Majesty is a better judge of character than most would like to believe.
Posted by MadMonarchist at 11:32 AM