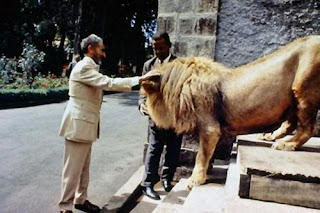 The last Emperor of Ethiopia with one of his pet lions. In general, my favorite images of any of the Ethiopian Emperors are those when they are in their full imperial regalia -showing all the glory of what a real, genuine African emperor looks like as opposed to the most recent (Bokassa) in Central Africa who tried to look like a Frenchman for some reason. However, I love the symbolism of the photos of Haile Selassie with his lions, mostly because of the symbolism, iconic images very evocative of Africa -the only native African Emperor and the lion, the "King of the Beasts" and they also (as intended) point to the Ethiopian Emperor's title, "Conquering Lion of the Tribe of Judah", which itself points to the Ethiopian tradition that their emperors descend from the offspring of the Queen of Sheba and King Solomon of Israel.
Posted by MadMonarchist at 2:18 AM