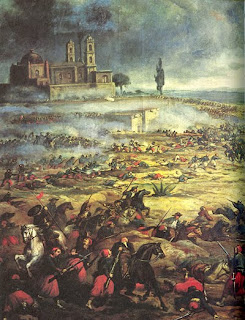 Today the people of Mexico celebrate "Cinco de Mayo" -the holiday celebrated in honor of the republican victory over the French Imperial Army at Puebla on the 5th of May, 1862. Republican leader Benito Juarez had bet everything on holding Puebla even though up to that time the French had been everywhere victorious. When the Mexican republicans (there were Mexican conservatives fighting alongside the French) under General Ignacio Zaragoza (a Tejano born in Goliad, Texas) succeeded in defeating the French a jubilant President Juarez immediately declared May 5th a national holiday. For those who care to know what Cinco de Mayo is all about, most know at least that much.

However, what many may not know is that, traditionally, May 5th has not been that big of a deal in Mexico. It is moreso today but even that is mostly because it became so widely known that May 5th was being much more widely celebrated in places in the U.S. like Texas and California by Mexicans no longer living in Mexico. The popular image is of a tiny band of ragged but fierce Mexican soldiers driving back an immaculate army of French dandies. In fact, the odds were not grossly uneven with about 4,500 Mexican republicans facing 6,000 French Imperial troops. The French attack was not well planned, but even then it was a lack of ammunition that finally forced their retreat.

Most importantly however, and this is unpopular and so will probably never be accepted, is the fact that for all the celebrations of the battle of May 5th the whole thing was really pointless for the Mexican republicans. It only delayed the inevitable, Emperor Napoleon III sent reinforcements to Mexico, reorganized the army command and the following year on May 17 the city of Puebla surrendered to the French and shortly thereafter Juarez abandoned Mexico City and fled north, clearing the way for the organization of a new government which eventually established the II Mexican Empire under Maximilian. For the rest of the reign of Maximilian the city of Puebla was under French, Mexican Imperial and Austrian protection. It was not until the final days of the empire that Puebla was retaken by the Juaristas on April 2, 1866. So, in looking at the big picture, one has to wonder just how worth celebrating the 5th of May is, even for those on the republican side. It really only serves to show just how few and far between their victories were in open battle against the imperialist forces.
Posted by MadMonarchist at 1:19 AM