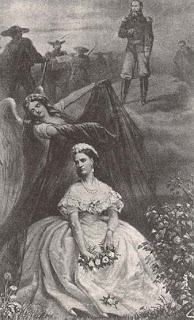 By the beginning of 1867 Napoleon III was bringing his troops home and advised Emperor Maximilian to return with them. By this time Maximilian was aware of the true situation in the country and the strength of the republican forces that opposed him. He was not the sort to wish to impose himself by force, and in any event with the withdrawal of French troops he had almost no force left. Again, he considered abdication, however, he was already involved and though they had opposed the enterprise, his family now urged him to stay on as long as possible to uphold the honor of the Hapsburg name. Maximilian, always the romantic sort, decided he had to remain and would seek one more climactic battle alongside his loyal Mexican troops that would decide everything. He made his last stand at Queretaro, which was eventually captured by republican forces and on June 19, 1867, to the horror of the civilized world, President Benito Juarez had Maximilian executed by firing squad. Even though she was half a world away at the time, in many ways Empress Carlota died alongside him that day.

That summer, Queen Marie Henrietta came to take Carlota back to Belgium. She was the wife of Carlota's brother King Leopold II, and Carlota had never liked her. While Carlota was very feminine and a deep thinker, her sister-in-law was a tomboy who thought about nothing but horses. Nonetheless, she took Carlota home and the Empress of Mexico took up residence in the Palace of Laeken with her family where she did quite well until another emotional breakdown in mid-1868 caused her to be put in seclusion at Tervuren castle. She came back once, but by the spring of 1869 her mental stability had deteriorated to such an extent that she was sent back to Tervuren for good. During her worst episodes nothing could console her, laughing hysterically one minute and weeping uncontrollably the next, talking endlessly on some subject or another or sometimes gibbering nonsense. During respites from these attacks she could for a time carry on as though nothing at all was wrong, behaving like her normal, charming and refined self. She would read, paint, play piano and answer questions perfectly rationally. And, as always, she took great care about her appearance and was just as beautiful as she had ever been.

A change in residence came after a fire in March of 1879 forced her to move temporarily back to Laeken, though she had to be tied to her carriage with a shawl, and then on to Bouchout castle where her behavior became even more erratic over time. During her worst attacks she would fly into a screaming rage, destroying furniture, shattering vases, even tearing up her beloved books and paintings. Yet, she never harmed anything that had some connection to her beloved husband, and even kept a doll that she slept with and called Max. Her brother, King Leopold II, never visited her, though Queen Marie Henriette and her girls did. Princess Stephanie, who would one day perhaps feel some connection with Carlota, said that she was never afraid of her deranged aunt even when she was very young. One day, Princess Stephanie would also marry a Hapsburg, the son of Maximilian's brother Emperor Franz Joseph, but this also ended in tragedy when he killed himself at Mayerling.

In her more peaceful moments it seemed that Carlota transported herself in her mind to the last part of her life where she felt the hope and optimism she once had in such abundance. In these moments, she was still in her palace in Mexico City, with her husband by her side and a world of possibilities before her. This was helped by the fact that everyone in her household continued to refer to her as "Your Majesty" and titled her as Empress of Mexico. In 1914, when World War I erupted and German troops invaded Belgium, Carlota was spared the sort of suffering that others endured. On orders from the German Kaiser notices were posted at Bouchout informing all German soldiers that the estate was the property of the sister-in-law of their Austrian ally Emperor Francis Joseph and strictly forbid any molestation of the property or person of the Empress of Mexico. Eventually the war passed and Carlota lived on in her tragic condition, sometimes in touch with reality and sometimes not, until her death by pneumonia at the age of 86 on January 19, 1927.

On the whole, one cannot but be touched by the tragic life of Empress Carlota of Mexico. She deserved such a better fate than the one she had. Her good nature, sincerity, compassion and high ideals could have made her the ideal queenly figure in a country and a time desperately in need of such a person. Yet, all her good qualities were met by the deception, betrayal and cruelty of those around her. She was young, full of exuberance and for a few years brought beauty, grace and civility to a torn and divided country. Ever the model of a devoted wife, the manner in which her good intentions and those of her husband were returned with senseless hostility and ultimately also by the murder of her beloved Max crushed her spirit and caused her to descend into a grief-induced madness from which she never recovered. Today, one can only appreciate her drive and goodness, sympathize with her suffering and loss and ponder at how much different, and better, things could have been if only she had been given the chance that she so much deserved.

Rest In Peace sweet Empress, and may flights of angels sing thee to thy rest.
Posted by MadMonarchist at 12:11 AM