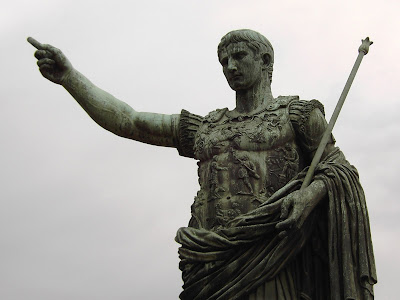 While Julius Caesar had laid the foundation for the eclipse of the Roman Republic by the Roman Empire it was his nephew, adopted son and heir, Augustus Caesar, who oversaw the transition and made it a success. It was Augustus who managed to get the ardent Roman republicans on the side of an imperial monarchy and embrace it whole-heartedly. It was Augustus who, as the saying went, ‘found Rome brick and left it marble’ and it was Augustus Caesar who established the government framework for the Roman Empire that allowed it to continue for centuries, through the reigns of good and bad emperors alike, and rise to dominate the known world. He was, in every way, a colossal figure in European, western and world history.

He was born Gaius Octavius (aka Octavian) in Rome on September 23, 63 BC. His father had been a senator but died when he was only four. It was through his mother that his most prestigious family ties came as she was the daughter of Julius Caesar’s daughter Julia. When Julius Caesar adopted him as his heir on May 8, 44 BC he took the name Gaius Julius Caesar. He fought with his uncle in Spain and was in Albania preparing to lead the campaign against the Parthians when he learned that Caesar had been assassinated. He returned to Rome and began building his political power base, supported by senators who were fearful of Marc Antony in particular. In a political alliance Antony married Octavian’s sister and the prestige of the young man was increased further when the Roman senate declared Caesar a god in 42 BC.

Nonetheless, Octavian (now known officially as Caesar) broke with Antony after his marriage with Queen Cleopatra of Egypt. This made Antony unpopular in Rome and Octavian took advantage of this to gain public support for moving against Antony, a conflict he won at the pivotal battle of Actium in 31 BC. This left Octavian as the most powerful figure in the Roman world but he had to move carefully to establish the imperial system without offending the republican sensibilities of the Romans, especially the Roman elite. He declared that he was restoring the republic and handed power back to the senate which promptly gave most of it back again in act of political theatre. He was elected consul every year and was given the name “Augustus”, meaning “the Exalted”. He did away with nothing of the republican system but consolidated the powers held previously by numerous individuals into his own hands; thus becoming the first Roman Emperor.

Later, a second settlement brought more regularity and permanence to his position, making Augustus effectively a perpetual consul. His preferred title was “Princeps” or ‘First Citizen’ and although he held ultimate power he still treated the senate with respect. He tried to maintain a feeling of things going back to normal while ushering in a new era with extensive building programs including a number of temples as Augustus was very pious and through his own example and legislation he encouraged an emphasis on religion and a return to traditional Roman family values. These changes, along with public games and an attitude of openness and tolerance of criticism made him a very popular monarch. However, in his private life he was not free of all scandal. He liked to gamble and had a number of mistresses but his biggest embarrassment was his daughter who he finally had exiled because of her debauched behavior.

Emperor Augustus was no great scholar but he was a man of common sense and some literary talent. In the same way he was no military genius but presided over some great victories because he recognized this fact and was content to leave military affairs in the hands of the professionals. He led one campaign in Egypt but generally left the strategy and tactics to others. Still, his reign was an era of great successes for the Roman Empire including the conquest of Egypt, the Alpine frontier and the northern Balkans. His most ambitious military effort was a plan to conquer Germany. His stepson Drusus was put in command but upon his death the burden fell on another stepson (and future successor) Tiberius. The effort to conquer Germany ended in epic disaster however when 3 legions under Quintilius Varus were wiped out at the battle of the Teutoburg Forest in 9 AD. Emperor Augustus mourned long and hard over this disaster and further plans for expansion were shelved and he even left instructions to his heir Tiberius to do the same and be content with the size of the Roman Empire as it was.

So, all in all, Emperor Augustus had been extremely successful. He had ended the civil wars and fierce partisanship of the late republic, accomplished the peaceful transition from republic to empire, restored and beautified Rome itself, set a new public tone, expanded and defended the empire and kept everyone on side by allowing the retention and maintaining at least outward respect for the republican traditions of Rome. Now, because of this last fact, and because Rome remained, at least on paper, a “republic” throughout the imperial period some have asked if not all the past centuries of the reading of history have been wrong and might Rome not have ever been a monarchy at all? I would find such an argument absurd, both based on the facts and because of my own attachment to the Roman Empire. It is not something I wish to surrender to republicans nor would any republicans I have ever met wish to accept it either. Perhaps the key element though that proves Rome did become a monarchy, and a monarchy of the sort most of us today would be familiar with, is the fact that a hereditary succession was established.

Part of what made Augustus so accepted as the natural leader of Rome was his status as the great-nephew and adopted son of Julius Caesar. In the same way his family was viewed very much at the time as the ‘Imperial Family’. It was important to Augustus that the succession continue in his family; the Julian dynasty. However, he ran into problems in this area because he never had a male heir of his own. Therefore he was forced to turn to the husbands and children of his controversial daughter Julia. Her husband Marcellus was considered but such talk ended with his death. Therefore Augustus arranged a marriage between Julia and his most trusted lieutenant Agrippa. Their union produced two sons; Gaius and Lucius, whom Augustus adopted as his own but with Agrippa to be his heir in their minority. Yet, Agrippa died in 12 BC, leaving no one to look after the tots that Augustus trusted so he was forced to turn to the sons of his wife Livia by a previous marriage; the aforementioned Drusus and Tiberius. He had Tiberius marry Julia but he was still reluctant to embrace the future going to the Claudian dynasty and continued to indulge his grandsons Gaius and Lucius. However, when they both predeceased him Tiberius was left as the only viable choice.

Augustus began to slow down as his years caught up with him and his health began to decline. He died at Nola on August 19, 14 AD just a month before his 76th birthday. His body was taken back to Rome and his ashes placed in his magnificent imperial Mausoleum. As the first Roman Emperor he set the standard by which subsequent monarchs would be judged and it was a high standard. He was an astute statesman, moderate, tolerant, careful and yet adept at acting at crucial times to turn situations to his advantage. He successfully made the Roman Republic the Roman Empire peacefully and successfully by establishing the monarchy slowly, step by step over a period of time. At the time of his death his full name and titles were, “Imperator (Emperor) Caesar Divi Filius (son of a god) Augustus, Pontifex Maximus, Consul XIII, Imperator XXI, Potestatis XXXVII, Pater Patriae (Father of the Country). He had known victory and some defeats but by any standard he left Rome stronger, more beautiful, more secure, more prosperous and with a more stable foundation for the future than he found it. The month of August was named in his honor and he was deified by the senate upon his death.
Posted by MadMonarchist at 12:18 AM