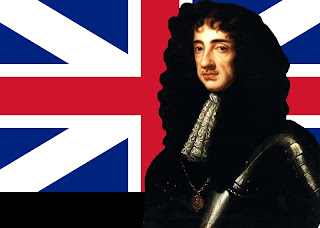 Today marks the birthday of the late King Charles II of Great Britain and Ireland as well as the date of his triumphal entry into London when the monarchies of the 3 kingdoms were restored after the nightmarish Cromwellian interregnum. In 1660, to celebrate the occasion, May 29 was declared an official holiday, Oak Apple Day, by the English Parliament. Sadly it was dropped as an official holiday in the British Isles in 1859 though there is evidence that certain festivities continued to be held for many years thereafter. When monarchial restorations are such comparitively rare things, monarchists must take what opportunities they can to celebrate and certainly there were few such genuinely widespread and happy occasions as the restoration of the "Merry Monarch" Charles II after the Puritanical tyranny of Oliver Cromwell. The Mad Monarchist extends a happy Oak Apple Day to all blog readers, followers and subscribers!
Posted by MadMonarchist at 4:16 PM