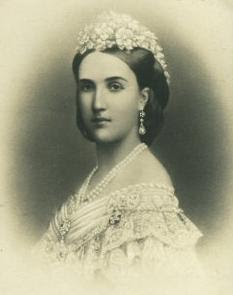 It was 1863, French forces had been fighting in Mexico which had only just come out of a period of internal conflict and the American Civil War had reached its bloodiest point. Maximilian was hesitant and his family strongly opposed the idea. It was still a dangerous country, divided, chaotic and poverty stricken, problems that seemed nearly impossible to solve, and the House of Hapsburg would be risking a lot getting involved. Charlotte, however, urged Maximilian to accept the offer. She was optimistic and had faith that this would be their chance to prove their own worth and talent as well as to put their own ideals into practice and make Mexico their showcase for benevolent, progressive monarchy. To Charlotte, it seemed like destiny and she also felt a humanitarian obligation to help the people of Mexico. Maximilian came to his wife's point of view, but still refused to accept the offer until Napoleon III promised him that he was genuinely wanted and that French troops and money would support him until Mexico could stand alone.

Not everyone reacted to the news well. Charlotte's French grandmother cried that, "They will be killed! They will be killed!" and Emperor Francis Joseph told his brother that he would have to renounce his rights of succession in Austria if he accepted, hoping this would dissuade him. Charlotte tried to dissuade her brother-in-law, but the stern monarch would not budge and eventually she persuaded Maximilian to agree to the terms. Along with the encouragement of Charlotte and French promises of support, Maximilian also received the results of a plebiscite held in Mexico in which the public voted in favor of restoring the monarchy with himself as Emperor. Little did he or Charlotte know that it was generally accepted that French troops had engineered the outcome to be in his favor. This, along with the opportunity to show the world what he could do finally prompted Maximilian to accept the offer and the Mexican delegation proudly hailed him as Emperor while a regency was set up to govern until he arrived. Also, unlike the Hapsburgs, the Belgian royal house largely met the news with great excitement and all of the optimism that Charlotte herself displayed. The new Empress changed her name to the Spanish version Carlota and she joined her husband in learning Spanish, studying Mexican history, custom and styles.

On April 14, 1864 the Imperial couple left Austria. They stopped at Rome to receive the blessing of Pope Pius IX and on orders from Queen Victoria the British garrison at Gibraltar saluted them as they entered the Atlantic. Carlota was excited with the possibilities that lay before them and envisioned a country full of adoring people who needed and wanted them, a romantic empire of scenic beauty, Latin charm and a chance to fulfill their destiny. When they landed in Veracruz on May 24, 1864 there was not much of a reception though and the journey across country was rough and uncomfortable aside from the warm welcome by the Indian population which saw them as potential liberators from their status at the bottom of Mexican society. It was not entirely what Carlota had expected, but there was still great promise. She was amazed at seeing such poverty contrasted with immense wealth and shocked by the ignorance of so much of the people, particularly noticeable to one as intelligent as her, which she blamed on a failure of the Church to properly educate and catechize as they should have.

Things were somewhat different when they arrived in Mexico City to a jubilant reception, welcomed not only by the conservatives who had supported the French intervention, but also by many who opposed it who saw in the gentlemanly Emperor and his lovely wife a chance at something better than the succession of petty dictators and warlords that had held power throughout Mexican history. In fact, so many occupants had come and gone so quickly that the National Palace was in horrible condition and Carlota could not sleep on her first night there because of the lice that infested the place. They decided to renovate the old Aztec summer palace at Chapultepec as their primary residence. Still, Carlota was charmed by many of the adoring people and their coronation in the national cathedral was a glamorous event the likes of which no one in Mexico had ever seen. Nonetheless, the rose colored glasses slowly fell from her eyes as even Carlota, who had been so enthusiastic about Mexico, was confronted with more and more disappointments.

She was shocked by the poor that lined the streets and she decided to give them jobs working in the palace and helping with projects to preserve national monuments and beautify the city. However, she wrote home bitterly that these people to whom she had tried to give an opportunity for something better often lasted in the palace for only a day, leaving in the night with as much stolen goods as they could take with them. Furthermore, they soon learned that not everyone in Mexico was overjoyed by their presence and the French warned them not to venture too far out unless they had an armed escort. The country had not been totally pacified and French forces were still fighting the considerable armies loyal to President Benito Juarez. The United States, though occupied in their war against the Confederacy, also opposed the monarchy and supported Juarez who had given them considerable concessions.

Nonetheless, Carlota was a woman of duty and she held grand balls at the palace to raise money for charitable causes and sponsored the building of schools, hospitals and poor houses. She toured the country on behalf of her husband, going to the wild Yucatan Peninsula and visiting the ruins of Uxmal. While Maximilian traveled about the country, Empress Carlota ruled in his absence as regent, even preparing official documents and running things when he was at home. Many Mexicans and French came to realize that she had a stronger personality than her husband and was much more formidable to deal with. If Mexico was not an ideal country, she was still determined to make it an ideal one but the policies Carlota and Maximilian enacted toward this end often worked against them. When he refused to restore the huge estates to their previous owners the conservatives became less enthusiastic about his rule and when he also refused to restore the favored position of the Church, the Pope recalled his nuncio in 1865. Carlota began to feel like a woman under siege, but those against her and Maximilian were to find her a formidable enemy. Their relationship with the French was also not always a cordial one. Carlota distrusted the French commander Bazaine and greatly preferred the commander of the Belgian legion in Mexico, Colonel Alfred Van der Smissen, whose troops acted as her personal guard.
Posted by MadMonarchist at 12:22 AM