The Sack of Rome 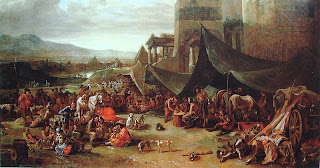 It was on this day in 1527 that one of the great disasters in modern European history occurred with the horrific sack of Rome by the out-of-control forces of the Holy Roman Empire. The violence was horrific, the cruelties committed were extreme and the desecrations unspeakable. It was certainly one of the most shameful episodes in the history of Europe and is generally considered as the end of the glorious Renaissance period. However, there was a shining example in this devastating atrocity and that was the immense heroism and sacrifice of the Papal Swiss Guard. All but a handful of these brave men were massacred, fighting to the death, overwhelmed and fighting up the very steps of St Peter’s Basilica; buying time with their lives for the handful that remained to escort Pope Clement VII to safety in Castel Sant’Angelo.

Even then, the safety of the Pope was very much in question and it was some time before the threat was removed as he remained besieged in the fortress (originally an Imperial Roman tomb) while the Imperial troops massacred people in the streets below. Many of the soldiers were German Lutherans but religious differences were of little consequence as others were German and Spanish Catholics. What is important to remember (and it often is not) is that the Holy Roman Emperor Charles V was not responsible for this horror, he did not order it, he was not present when it happened and he was shocked, outraged and ridden with guilt when he found out about it. He had his political differences with the Pope from time to time, as most rulers did at one point or another, but Charles V was a very staunch Catholic and he was horrified by the violence that had been carried out by soldiers in his service.

So, when looking back on the sack of Rome, it is wrong to try to play the blame game. Charles V was certainly not at fault -the ones at fault were the ones who carried out the atrocities. Instead, the Catholic Church sets a better example by using the occasion to honor the sacrifice of the Swiss Guard by using May 6 as the unit holiday for the Swiss Guard, the day when new recruits are officially sworn in and pledge their lives to defending the Supreme Pontiff.
Posted by MadMonarchist at 12:44 AM