How Revolution Came to Mongolia 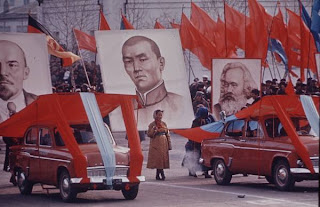 The Mongols are a people not often thought of in the west. For most the country is thought of only as the epitome of remote isolation with the very name of Outer Mongolia being synonymous with the middle of nowhere. Yet, is has fascinated me since I was a schoolboy reading about the one Mongol who is at least known to most everyone: Genghis Khan. I am often asked about the state of monarchism in Mongolia and there is more to this than a simple lack of information. When stepping back and looking at the situation it seems odd that Mongolia is not a monarchy considering that there are few if any countries today where it is a great founding monarch who is the most honored, commemorated and venerated figure in public life. It is no exaggeration to say that Genghis Khan, the founding Mongol Emperor, is more revered than Mao in China, Uncle Ho in Vietnam, Benito Juarez in Mexico or Washington and Lincoln in the United States. He is practically worshipped as a god in Mongolia and by Mongols in Chinese-ruled Inner Mongolia and other areas. So, given that, how is it that revolutionary republicanism came to the Mongols?

The short answer is Bolshevik Russia. Mongolia was actually the first country in the Far East to fall prey to communist aggression and although it is not often remembered, few if any countries suffered as much from communism. The first time republican rule came to Mongolia was when nationalist troops of the Republic of China marched in and forced the ruling Buddhist monarch, the Bogd Khan (Holy Emperor) to submit to them (he was later deposed and arrested). This situation was relieved in 1921 when the White Russian general Baron Roman von Ungern-Sternberg drove out the Chinese and restored the Bogd Khan to his throne. However, even by that time the Bolshevik-inspired Mongolian People’s Party had already been formed and one of the founders was Damdin Sukhbaatar. They worked with COMINTERN agents to form a communist front to take over the country.

Two Mongol communists, Danzan and Choibalsan immediately sought out Soviet agents and requested that the Red Army invade their country to ensure a communist victory. The Soviets had, at first, put off the Mongolian Reds but they were stirred to action by Ungern-Sternberg who, after defeating the Chinese and restoring the Bogd Khan openly planned to forge a pan-monarchist coalition to invade Russia and restore the Romanov monarchy. Toward the end of May the Baron was defeated by a Russo-Mongol communist army twice his size and the Reds seized power. Promising to leave religion alone they took over the government, forcing the Bogd Khan to hand over power to them. However, the Buddhist faith was so strong in the country that they dared not remove the Emperor himself and he remained symbolic head-of-state until his death in 1924. The Mongolian People’s Revolutionary Party declared his incarnations to be at an end and announced the birth of the Mongolian People’s Republic.

The primary leader of the communist forces was Sukhbaatar, Minister of the Army, who oversaw numerous executions but died in 1923. In recognition of his leading role in the revolution the Mongolian capital was renamed Ulaanbaatar (Red Hero) in his honor. Free enterprise was banned, herds were collectivized and property of the nobles, princes and monasteries were seized. However, bad as things were they became much worse when the Soviet Red Army occupied the country in 1937 on the pretext of defending Mongolia from the Japanese. Choibalsan, surely one of the most ruthless communist dictators ever, was a fawning sycophant of Joseph Stalin and tried to mimic his rule in Mongolia.

The Mongol economy was reworked to simply serve the needs of the USSR and Choibalsan unleashed a reign of terror the likes of which had never been seen. Any potential rivals were murdered in a series of purges, virtually all of the monasteries were destroyed after the people had been pumped full of propaganda films portraying the monks as greedy and cruel. The youth especially were mobilized and countless works of art, priceless Buddhist scriptures and ancient temples were destroyed in an orgy of violence. Tens of thousands of nobles, monks and anyone suspected of being an enemy of the regime were massacred. Some estimates put the number of victims of the communist regime as high as 100,000. Choibalsan made himself the “mother, father and teacher” of the people and demanded religious-like veneration of himself.

The devastation may have reached its height under Choibalsan but it by no means started or ended with him. Mongolia became a part of the USSR in all but name and in just a few years went from being one of the most religious countries in the world to one with virtually no religion at all. All reminders of the glorious past and all traditional culture were stamped out. Families forgot their own names, Buddhist rites were forbidden until no one remembered how to perform them. Even the memory of Genghis Khan was almost erased. Streets were named after communists, new buildings were built in box-like Bolshevik style, the nomadic way of life the Mongols had lived for uncounted centuries was destroyed as the communists crowded everyone onto farm communes and smoke-belching factories in the capital. The old felt tents were destroyed and replaced by crude, boxy houses in the name of “progress”. Even to this day the Mongolian language is written in Russian rather than the Mongolian style. The memory of the last emperor, the Bogd Khan, was smeared at every opportunity and statues were erected of men like Sukhbaatar, Choibalsan and Stalin.

In few, if any, other countries where communist purges occurred was the erasure of what had come before the red regime so complete. As the USSR deteriorated the Red Army withdrew its forces in the late 1980’s and early 90’s. In 1990 the first open elections were held in Mongolia but the work of decades had been done well and the Mongolian People’s Revolutionary Party still won by a wide margin. It was not until 1996 that they were voted out of office and even then, after a simple name change, they have continued to hold power more often than not ever since. None of the butchers of the communist era were ever brought to justice and though the statue of Stalin was taken down and packed away in the middle of the night, the monument to the tyrant Choibalsan remains standing, as does the huge statue of Sukhbaatar and the capital still carries his name. As for the Bogd Khan, the last Holy Emperor, his reincarnation was recognized by the Dalai Lama and he performed a belated enthronement for him in Mongolia but, thanks to the continued rule of the leftist elite, he still lives in exile in India.
Posted by MadMonarchist at 12:57 AM