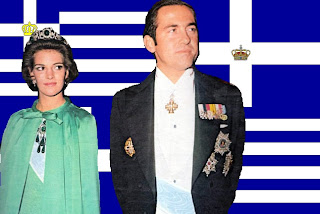 With the current crisis in Greece, yet another shining example of republican failure, many people, knowing my monarchist sympathies, have asked me how things would be different if the Greek monarchy was still around. This is all speculative of course but that's never stopped me. Of course, I would like to say that everything would be coming up roses if only Constantine II were still head of state but that would be a tad dishonest. Contrary to popular opinion the King of the Hellenes was never the autocratic sort of guy and it is possible, even if he were still on the throne, the democratic process could still have produced a parliament and a succession of PM's who would have put Greece in the same sorry state it is in now. However, the fact remains that Greece is a republic and it has failed miserably and my usual comment on the subject of what would be different with the King on the throne is that the monarchy certainly could not have done any worse.

I am no expert on Greek politics nor are economics my strong point. So, keep in mind my views on this subject are not strident. From where I sit it seems to me that the best thing for Greece to do would be to abandon the euro and restore the drachma. A lower value of currency would mean that investors would get more 'bang for their buck' in Greece and attract investment. This would have to go hand-in-hand with some big changes for the Greek economy. Obviously the socialist set-up of high taxes and entitlements would have to be done away with -it plainly does not work. The Greek government needs to stop the rampant spending and attract more businesses -and thus more jobs- to Greece. The King could give some practical help in this area by bringing a sense of security and stability but the country must also crack down on corruption and lower taxes. I know, that's a dirty word in modern Europe, but a simple look at the micro-monarchies of Liechtenstein and Monaco show how much investment and prosperity come to a country with very low taxes.

Now, if the Greek King were to be restored with some real political powers I think he could certainly be a big help in getting these things done -for starters by sacking incompetent and corrupt officials. However, he would certainly become unpopular just as the current government is by cutting entitlements and stopping the government hand-outs. This is what socialism does to a country. Others have pointed out that this has not happened in other socialist European countries but it seems to me that it must eventually. One can only keep up the juggling act for so long and when pay-outs overtake income something will have to give and across Europe those on government welfare have been steadly increasing in number while the overall population is in decline -all recipes for disaster. Whatever happens I hope everything works out for Greece, it is painful to see the "cradle of civilization" in the state it is in. I would just encourage the Greeks to look at what socialist republicanism has brought them and keep in mind that your King and Queen are still available -ready, willing and able to serve.
Posted by MadMonarchist at 5:26 PM