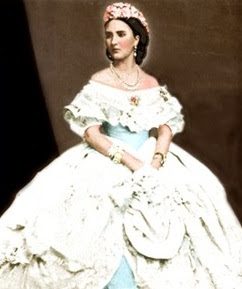 With their relationship with the French deteriorating, Maximilian and Carlota began to address the subject of the succession. Empress Carlota had been unable to have children, though chances are the responsibility for that lay with Maximilian, and so in order to have an heir who also had legitimacy in Mexico and no connections with the French they decided to adopt two grandchildren of the original Mexican Emperor, Agustin de Iturbide. The agreement between the two families was finalized on September 15, 1865. Some in the House of Iturbide were excited that they would be regaining their position and felt they had finally been recognized for the role of Agustin de Iturbide in winning the independence of Mexico. However, there was some embarrassment when the mother of Prince Agustin, chosen to be heir to the throne, went complaining around France that Maximilian and Carlota "had stolen her son from her". Adopting a child was something of a sacrifice for the proud Carlota, but it was one she bore as part of her duty, as Empress, to her new country and she never shirked her duty.

Her heartaches continued to mount though. In December of 1865 her father, King Leopold I, died in Belgium and this, along with all of the many problems in Mexico was almost more than she could stand. 1865 also brought the end of the War Between the States north of the Rio Grande and allowed the United States to more actively support Juarez and pressure Napoleon III. A so-called Army of Observation, consisting of 50,000 veteran troops was dispatched by the US to the border and this, along with mounting discontent at home and the increasing aggression of the Prussians prompted Napoleon III to withdraw his support for the Mexican Empire early the following year in 1866. Disregarding his earlier promises of total support until Mexico was secure, Napoleon III ordered his forces back to France and said there would be no more help in either men or money to support Maximilian. Carlota finally lost the last of her optimism and became depressed and increasingly nervous about the fate of her husband and her new country.

Maximilian, not wishing to impose himself if he was not truly wanted, and seeing the odds mounting against him, considered abdicating, but Empress Carlota, despite her sadness, was not the sort of woman to give up and she was determined that they would prevail against all those who had used and deceived them. She was a source of strength to her husband who finally came to agree with her, remembering that regardless of the circumstances he had sworn an oath at his coronation to serve and protect Mexico and nothing could cause him, or Carlota, to abandon their country. Carlota had been on less than friendly terms with the French for some time, and when Napoleon broke his promise and the Treaty of Miramar, it was more than she could stand and she was determined to show Napoleon that she was not a woman to be trifled with. She decided to confront him herself, she would fight for her husband and her country and demand that Napoleon honor his agreements and seek whatever additional aid she could in the courts of Europe.
Posted by MadMonarchist at 12:15 AM