The Marine Who Became a King 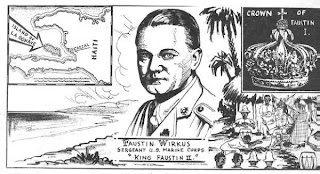 On this Memorial Day the Mad Monarchist would like to share the little-known story of one of the most unusual tours of duty in the history of the US military. It is the story of Polish-American Sergeant (later warrant officer and in some documents lieutenant) Faustin E. Wirkus, United States Marine Corps. A native of Pittsburg, Pennsylvania he joined the Marine Corps at the age of 18 in 1915. He was dispatched to Haiti when that country was in political turmoil which prompted US occupation. He distinguished himself in combat against local renegades and in 1921 was assigned to serve as administrator of the island of La Gonave about 40 miles north of Port-au-Prince.

Faustin worked hard on the island and soon gained the respect and admiration of the natives. After about a year he was summoned to the home of Queen Ti Memenne who related to him the story of a past ruler of the island who had also been named Faustin. He had disappeared in 1848 but promised that one day one of his descendents would return to claim the throne. Because of his name and the energy he displayed in improving their lives the US Marine was formally crowned “King Faustin II” in a Voodoo ceremony by the natives. The new monarch used his status to further improve conditions on the island and ensure a smoother running administration. Later he was transferred off the island to help establish a military academy to train local Haitians to facilitate the hand-over of responsibilities and the withdrawal of American forces.

The people of La Gonave were sad to see him go but gave him quite a send-off. By that time, according to a 1930 newspaper report, King Faustin II had become something of a celebrity across Haiti. By the time American forces left Haiti in 1934 Faustin E. Wirkus was the subject of a number of dime-store novels which related, with various embellishments, the story of the US Marine who became the “White King of La Gonave”. Faustin himself cooperated in the writing of at least one such book of the same title. The New York Times ran an obituary on the Marine-turned-monarch on October 9, 1945.
Posted by MadMonarchist at 12:15 AM