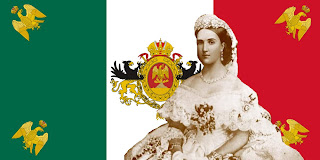 The woman who would become the last Empress of Mexico was altogether a tragic figure. She was a woman of great dreams and high ideals, of intense courage and devotion. Superficially she seemed to have quite an enviable position; she was a beautiful princess, married to a romantic, tall archduke, living in palaces and attending grand parties. Yet, beneath it all, she was a woman who suffered intensely from deception, betrayal, restlessness, loneliness and finally a grief so intense that she suffered a total emotional breakdown. She was born Marie Charlotte Amelie Augustine Victoire Clementine Leopoldine of Saxe-Coburg and Gotha on June 7, 1840 to King Leopold I of the Belgians and his second wife, the French princess Louise Marie d'Orleans at Laeken Palace in Brussels, Belgium. She was named after Princess Charlotte of Great Britain, the beloved first wife of King Leopold, who had died in 1817 and was a first cousin to Queen Victoria and Prince Albert of Great Britain.

Princess Charlotte suffered the loss of her mother when she was 10 and partly as a result, she had to grow up in a hurry. She grew into a well read, very intelligent, energetic and committed young woman. She enjoyed social functions but was also very serious, especially about her royal duties, which she never neglected. She was also interested in philosophy as well as mathematics and could read Plutarch when she was 13. It was in the summer of 1856 that she first met the Austrian Archduke Maximilian von Hapsburg. The slim, blonde prince was a hopeless romantic, charming, humorous and friendly. He was probably not as intelligent as Charlotte, but he had varied interests. He was a naturalist who studied birds and butterflies and seemed to have an inherent appreciation for beauty in the world. With her slender figure, soulful dark-brown eyes and long black hair, the 16-year-old Charlotte was certainly a beauty he could appreciate. They fell deeply in love and Maximilian soon asked King Leopold for the hand of his daughter. The Belgian monarch would have preferred Charlotte to marry King Pedro V of Portugal, but the only brother to the Hapsburg Emperor was a prestigious match and he allowed Charlotte to marry Maximilian if she wished.

Their romance deepened on Maximilian's second visit to Belgium. Maximilian talked to her about politics, Lord Byron, his own beliefs and goals, his planned for home of Miramar in Triest, Italy and about his many travels. Both were idealistic and very progressive for their time and Maximilian once remarked that he was a liberal, but Charlotte was a radical. She became more fascinated by him and totally adored and idolized him. There were though, rather tiring negotiations concerning Charlotte's dowry that went on and on until the handsome couple were finally married on July 27, 1857. The beaming Charlotte, at 17-years-old, was now an Austrian Archduchess and traveled first to Vienna and then to Italy where Maximilian took up the post of Viceroy of Lombardy and Venice. Their reception in Milan was not extremely cordial, but Charlotte was very impressed with Venice and did what she could to win the approval of the Italians. She wore local dress and wrote letters home about how much she loved the area. They were housed in the villa Miramar other than for a period in 1859 when an Italian rebellion forced them out for a time, and while Maximilian carried out his royal duties Charlotte busied herself with reading, writing, swimming, sailing and painting. However, both of them were enthusiastic and idealistic young people and felt somewhat restless and disappointed that they were not being used to their full potential.

In time, their opportunity for greatness did come and it came from Mexico, via the French Empire of Napoleon III. In many ways, what became popularly known as the "Mexican Adventure" was settled by two women: Princess Charlotte and Empress Eugenie of France. For some time Mexican traditionalists had been in France lobbying for intervention in Mexico following the takeover by the regime of President Benito Juarez who had expelled all conservative opposition, attacked the Church and seized control of all large estates. Empress Eugenie was particularly touched by the plight of the Church and she worked on her husband to help resolve the situation. Napoleon III thought it would also be good for French prestige and commerce to have a friendly government in Mexico City and so he backed the Mexican conservatives who went to Miramar to offer the Crown of Mexico to Archduke Maximilian.
Posted by MadMonarchist at 12:27 AM