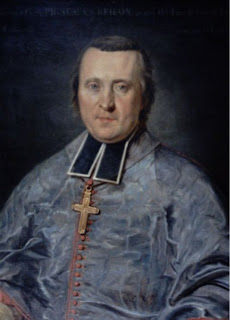 Pierre Pigneau de Behaine, Bishop of Adran, was a key individual in the rise to power of the Nguyen, the last imperial dynasty of Vietnam. He took holy orders and journeyed to the Far East to train native missionaries in Thailand. Wars were raging in Indochina with civil wars in Vietnam and a Burmese invasion of Thailand and Behaine himself was at one point arrested and held in the most cruel confinement but refused to return to a comfortable life in France. He felt his work was too important. They key moment came when he took in a refugee prince, the sole survivor of his family, named Nguyen-Phuc Anh in 1777. Anh would never forget the kindness that Behaine had showed him and in time the two became allies in the effort by Anh to unite Vietnam. Behaine went to France to negotiate a treaty with King Louis XVI by which France would obtain exclusive trading rights, an island base and the freedom to spread Christianity in return for French military support against the ruling Tay Son clan with whom Nguyen Anh was at war. King Louis agreed but things soon fell apart with France already on the brink of revolution.

However, Behaine did not give up. He recruited his own mercenary force of naval and artillery experts to come to the aid of Nguyen Anh. His assistance proved decisive as the forces he assembled gave Anh a definite advantage over his enemies. However, Behaine suffered greatly as he accompanied the army. He was with the forces of Anh's son, Crown Prince Canh, at the epic battle of Qui Nhon where he died of dysentery on October 9, 1799. The war went on and in 1802 Anh succeeded and was enthroned as Emperor Gia Long. He had written an extremely moving tribute to his departed friend at the time of his death and the Emperor further honored him with the most lavish funeral ever given to a foreigner in Vietnam as well as building him a magnificent tomb. He also continued to allow religious freedom throughout his reign because of the kindness the Christian bishop had shown him.

Successive monarchs turned against the Christians, and French (seeing them as the same) but later on full religious freedom was enacted. That all ended with the ultimate victory of the communist revolutionary forces in the 20th Century. In 1983 the communist Vietnamese government destroyed Behaine's tomb, incinerated his corpse and sent the ashes back to France where they now rest in the Paris Foreign Missions Society.
Posted by MadMonarchist at 1:09 AM