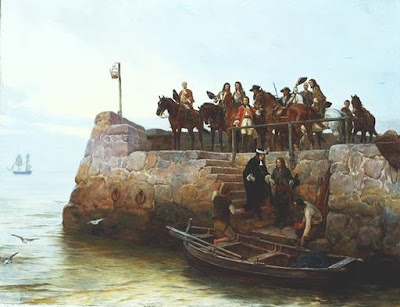 I do love British history and in general can enjoy any discussion of the subject with my fellow royalists. However, nothing infuriates me more than those who constantly slander the name of King James VII of Scotland and II of England, particularly with the epithet of "coward". James II himself probably smelled more gunpowder than all of those who make the charge put together, but it is important to remember his actions in the context of his life. He had seen his father stand against the odds when the situation was clearly hopeless and he lost his head for it and the British Isles were grasped by years of republican dictatorship. The mark that left on the young James cannot be overstated. Once his brother returned to the throne James followed the dictates of his conscience and became a Catholic, even though he knew it would make things politically very difficult for him. His brother King Charles II admitted that he believed Catholicism was true but that it was not prudent to say so and he held off conversion until he was on his deathbed.

During that time James saw religious hysteria whipped up by the Titus Oates plot, which was a total fabrication aimed at vilifying Catholics. There was also the Rye House plot which actually sought to restore the Cromwellian republic and in which was implicated the Duke of Monmouth who all to many of James' critics seem to want to glorify. James II was a far more hard working monarch than his more popular brother had been and he was certainly no tyrant. He simply felt that the laws which discriminated against anyone who was not Anglican were unfair -not simply towards Catholics like himself but also towards dissenting Protestants. Before it was popular to do so he wanted Britain to be a land where people advanced by their merits rather than by refusing the allegiance of perfectly loyal subjects based simply on their religion. Everyone points out his raising of a "Catholic army" as a source of potential tyranny but this is absurd. As soon as he came to the throne his illegitimate nephew Monmouth had tried to overthrow him and so it was perfectly natural that he wanted a standing army to guard the peace of the realm. It was also not a Catholic army. Many of the officers were Catholic but many, especially in the upper echelons, were not as was clear when they turned against him in 1688.

Moreover, for Anglicans, rebelling against James II, though a Catholic, went against the very foundation of their church was, from the time of Henry VIII, based on royal supremacy. I would think the 1688 Revolution would be hard for any honest Christian of any kind to support given the Biblican command for children to obey their parents. That hardly seems in keeping with a daughter and son-in-law overthrowing their father and lawful monarch. That James II was captured and later fled does not prove him to be a coward. The case could perhaps be made if he had fled beforehand but he did not, he went to France only when it was clear that the cause was finished and there was no other option other than death which neither side wanted. He is also often criticized for leaving Ireland too soon because the battle of the Boyne was not a major tactical defeat. However, these people overlook the wider war. The siege at Derry had failed, Enniskillen could not be taken, the Jacobites lost at the battle of Newtownbutler and thus lost Ulster completely and after the Boyne most of the Scottish volunteers had given up and gone home. Clearly, again, not much could have been gained by James II staying other than his capture and execution which would also have meant the abandonment of his wife and children. By leaving he was at least able to live to fight another day and supervise the raising of his son to carry on the struggle and prepare for that day. It is also worth pointing out that James II, at the Boyne and elsewhere, was constantly in harm's way and certainly did NOT behave in anything remotely close to a cowardly fashion. He was a long-time military veteran and had seen more than his share of combat over the years.

James II was no coward and he was no despot. It was his tolerance, not his despotism, that most of his enemies objected to. Of course when he was overthrown and replaced by his son-in-law religious toleration was extended to Protestant dissenters as James II had done, but, of course, Catholics alone remained discriminated against.
Posted by MadMonarchist at 9:55 PM