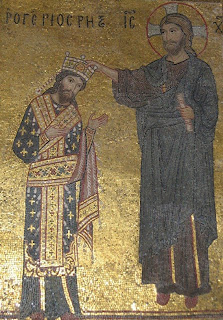 (This bio was contributed by blog follower Paul the "Mediterranean Monarchist", posted at his request)

King Roger II of Sicily was a descendant of the Norman knights whom the Popes had recruited to fight the Muslim expansion in the Mediterranean. He succeeded his brother Simon of Hauteville as Count of Sicily in 1105 with his mother (queen consort of King Baldwin I of Jerusalem) as regent and grew up in a very cosmopolitan atmosphere unique to the Mediterranean in the Middle Ages. One of his earliest advisors was the Emir Christodulus of Palermo and in 1110 he was visted by King Sigurd Jorsalfare of Norway who was going to the Holy Land.

When he reached his majority in 1112 he began to rule on his own with the help of a diverse array of advisors as the Sicilian court was unmatched in its racial and religious tolerance. Over the course of his reign he was assisted by Arab and Greek scholars as well as men from all across Europe. Talent brought promotion rather than favoritism of faction. His court included the Arab geographer Muhammad al-Idrisi, the Greek historian Nilus Doxopatrius, the aforementioned Christodulus and made Thomas Brun (the son of a courtier of King Henry I) of England the leader of his court. In 1117 he married his first wife Princess Elvira of Castile and he claimed and finally conquered the Hauteville family possessions in the south of Italy, starting a campaign that would ultimately lead to the unity of all Norman Italian possessions.

His campaigns to take control of Capua and Apulia were resisted by Pope Honorius II. Though it was the popes who had invited the Norman presence in the Mediterranean they feared any consolidation of power on their part. At one point a crusade was even declared against him but Roger II was aided by the ongoing warfare between the Pope and the Holy Roman Emperor. When imperial troops forced Pope Innocent II to flee to Pisa Roger II backed the rival Pope Anacletus II. Eventually papal misfortune left them dependent on Roger and to placate him he was given the title of King of Sicily. He was crowned on Christmas in 1130 in Palermo.

For the next ten years Roger II had to fight rebellions in the south of Italy as well as papal-backed coalition of powers against him who was called “half-heathen” because of the way Christians and Muslims, Catholics and Orthodox served alongside in his domain. Roger knew victories and defeats in the long struggle but could not take Naples from the rebel forces. In 1136 German imperial troops moved in from the north with naval support coming from the Byzantine Emperor, both of whom were jealous of Roger’s growing power in the Mediterranean. Luckily, once Apulia was taken by imperial troops the Holy Roman Emperor Lothair III went home and gave King Roger II some breathing room.

The Sicilian attack on Apulia was defeated but Roger II came back and won the final victory in Capua where the rebel leader died of malaria in his capital of Troia in 1139. All the while Roger II, who viewed himself as God’s viceroy, was eager to reconcile with the Church but the Pope demanded the price of an independent Capua between Sicily and his own states which Roger II refused to pay. Pope Innocent II invaded Roger’s country in 1139 but was ambushed by Roger’s son, his army defeated and the Pope taken prisoner. Now within his power his longtime enemy now had a change of heart and recognized Roger II as King of Sicily, Duke of Apulia and Prince of Capua. The Kingdoms of Naples and Sicily, which existed for the better part of a thousand years thereafter, were thus fixed in their familiar borders.

King Roger II put down some remaining rebels and ensured peace and stability in the years to come by centralizing power, diminishing that of the local potentates and introduced a standard currency; the ducat. Roger II was then able to focus his attention southward and with the help of veteran Greek, Saracen and west European mercenaries was able to build up a respectable naval force until the Kingdom of Sicily became the dominant naval power in the Mediterranean. His expanded his power to the northern coast of Africa, taking numerous ports and coastal territories including Tripoli and Cape Bona.

With the outbreak of the Second Crusade Roger II was able to turn some old enemies into allies and launched his naval forces against the Byzantines. In 1147 his forces captured the island of Corfu and raided places from Athens to Thebes from which he imported the Sicilian silk industry. Unfortunately he lost Corfu when his fleet launched an ultimately futile attack on Constantinople itself. Not quite ten years later King Roger II died in Palermo on February 26, 1154.
Posted by MadMonarchist at 1:09 PM