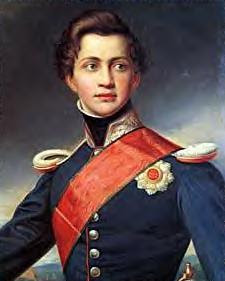 Today, May 20, marks the anniversary of the day in 1835 when Prince Otto Friedrich Ludwig of Bavaria was first named King of the recently liberated country of Greece. The choice of Prince Otto, a German Roman Catholic, as first monarch of modern Greece certainly presented a great many problems to overcome and given how things turned out for him, he could not, in practical terms, be considered a success. Yet, his reign also represented a vision for future greatness that one cannot help but be attracted to; and rather sorry that the Greeks were not able to achieve it. He was only 17 when he was elected King of Greece in cooperation with the 'Great Powers' of Europe which were sympathetic to Greek independence but also worried about a major war with the Ottoman Empire to which many Greeks in the un-liberated areas were still subject.

Almost as soon as he set foot on Greek soil King Otto faced considerable discontent and many, many problems. For one thing, although he agreed that any future heirs of his would be raised Greek Orthodox, Otto refused to abandon Roman Catholicism which earned him the wrath of many Orthodox Greeks. He also had to built a new country almost from scratch and that required a considerable increase in taxes to staff new positions, build infrastructure and things like schools and hospitals to put Greece on the road to becoming a modern country rather than the underdeveloped Turkish vassal it had been. This also aroused discontent as did the number of Bavarians that Otto brought with him to help get things up and running. His wife, whom he married in 1837, was not terribly popular either.

One thing that no one can deny is that King Otto cared about Greek greatness. Despite the opposition of the major European powers he almost immediately began to call for the restoration of traditionally and ethnically Greek territories but was thwarted at almost every turn. Religious problems were myriad with the Greek Patriarch still living in the Ottoman Empire, Russia backing up the Orthodox position and other European powers sending in Protestant missionaries along with the resentment of the King's Catholicism. One camp portrayed the new regime as determined to destroy the Orthodox heritage of the country while the other portrayed Greece as primitive and religiously intolerant. The threat of revolution was never far and as soon as the King sent his Bavarian troops home there was a mutiny which forced Otto to grant a constitution. The King was also thwarted in his efforts to expand Greece by entering the Crimean War against Turkey to annex those areas populated by Greeks into a restored Byzantine Empire. The British took swift action to prevent such a conflict and the King's prestige dropped further.

In 1862, while away from the capital, there was another coup which declared the King deposed and a new provisional government established. The major powers somewhat sympathized and urged King Otto to accept the situation, which he reluctantly did, taking a British ship away from Greece and going into exile in his native Bavaria. He wore traditional Greek costume for the rest of his life and died in Bavaria in 1867.
Posted by MadMonarchist at 12:35 AM