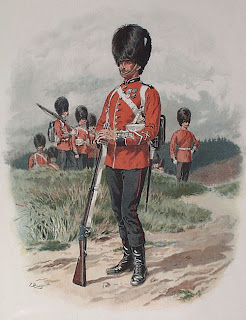 The senior infantry regiment of the British army, the Grenadier Guards first formed in Belgium to protect the exiled King Charles II and later earned their highest honors and reputation by defeating the French Imperial Guard of Napoleon at the battle of Waterloo. They are one of the units of the famous Guards Division and like the rest are called on to take their turn standing guard over Buckingham Palace and Queen Elizabeth II, carrying on a long and honorable tradition as they have served and guarded 13 British monarchs. Their training is extensive and lasts two weeks longer than other British infantry regiments because of the extra time that must be spent to perfect their drill and ceremonial duties as a guard regiment. However, they are not simply parade ground soldiers and have earned battle honors in the War of Spanish Succession, the War of Austrian Succession, the Napoleonic Wars, the Crimean Wars, colonial conflicts in Africa and China, both World Wars and the Persian Gulf War. Like all "Household" units the monarch is the official colonel-in-chief of the Grenadier Guards.
Posted by MadMonarchist at 11:48 AM