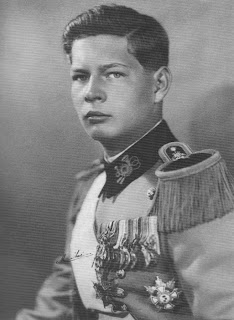 In a move that certainly surprised me, King Michael I of Romania has officially endorsed his son-in-law Prince Radu Duda in his run for the presidency. I am almost tempted to wonder if the King has been brainwashed. It seems so unlike him. You can read the message of endorsement here. Not only does King Michael endorse his son-in-law but he seems to imply that this an effort on the part of the Romanian Royal Family as a whole in what he calls a family effort to "unite and rehabilitate the Romania of today". Huh?! How have the politics of republicanism ever united a people? The people who support other candidates will certainly not be united by Prince Radu becoming President of Romania. Perhaps I am being too hasty, I have always had a great deal of respect for King Michael, but I was less than thrilled when Radu first announced he was entering the political fray and I am shocked and almost mortified that King Michael would so zealously endorse him and effectively turn a presidential election into a vote on the monarchy -and a royal restoration is not even on the table!

It was hard for me to believe that King Michael was actually the source of the words I was reading. He spoke of gaining the respect of the rest of the world and mentioned Italy, Spain and America. Well, with all due respect Your Majesty, Spain is a monarchy, Italy is one of the most chaotic republics in Europe (a shining example of the corruption and instability of the republican system if ever there was one) and I am sorry to say that in America having a royal son-in-law as President will probably win Romania no respect either. They will likely conclude he got the office because of his blue-blood ties. However, the fact of the matter is that, even in the best of circumstances, I cannot imagine Prince Radu has a snow-flakes chance in Laredo of winning. I have not spoken to anyone who thinks his chances for success are in any way realistic and that makes it all the more mind-boggling to me that King Michael has so enthusiastically endorsed him and even sounded as if the Royal Family was somehow included in the race. It looks like we might have a disaster to top even that of Tsar Simeon II in Bulgaria; which, I might add, King Michael had enough sense to stay out of.

Posted by MadMonarchist at 7:01 PM