The End of the End for Royal Vietnam

Today marks the anniversary of the end of one of the most pivotal battles in world history; the siege of Dien Bien Phu in the mountainous jungles of North Vietnam in 1954. It was pivotal because it spelled the end of the French presence in their former colony of Indochina, it spelled a further conquest by the international revolutionary forces of communism and it was pivotal because a third-world colonial guerilla force had defeated a European power. In later years when the conflict against the communists in Vietnam was taken up by the United States many Americans would deride the French for this, but in fact the French fought longer than the Americans, took heavier losses than the Americans and did so without conscription in metropolitan France unlike the USA. That being said, for most of the conflict the USA under President Eisenhower had been funding the French war and the French and associated forces were in most cases armed, clothed and equipped by the US.
The siege of Dien Bien Phu was an epic, dramatic, and colorful page in history but I will fight the urge to go into it in detail. What I mention it here for is that the siege was not unrelated to the cause of monarchism. Although it was not a strategically crippling defeat for the French (who were actually a minority in the battle with most of the troops being North African, Vietnamese and the Germans and others who made up the Foreign Legion units) but it was seen as the last straw to a war weary public and effectively ended the "First Indochina War". The French fought that war on behalf of the State of Vietnam (as the US would later do with the Republic of Vietnam or South Vietnam) and the "Chief of State" of the French Associated State of Vietnam was none other than HIM Bao Dai, last Emperor of the Nguyen dynasty. When the French were defeated at Dien Bien Phu it effectively meant the end of the rule of the last Viet monarch.
That does not mean that the State of Vietnam was a monarchy, though it certainly looked, 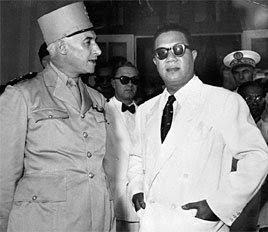 sounded, felt and acted like one. Its official status was ambiguous, something which probably hurt it. The former Emperor was not officially restored as Emperor (he had abdicated in 1945 at the height of the August Revolution) but he was still addressed like royalty, treated like royalty and his son and heir, the Prince Imperiale Bao Long, was treated as his son and heir and even went to London to represent the Nguyen dynasty at the coronation of Queen Elizabeth II. There is also the fact that Bao Dai had no other claim to power besides the fact that until 1945 he had been the Emperor of Vietnam. He was not happy about the dependence on the French but also recognized the fact that besides the communists they were the only option. He had himself grown up in France and the French had long helped maintain his family's monarchy though their colonial policies no doubt weakened it. Other powers might not be so considerate.
The defeat at Dien Bien Phu meant that the French gave in to the communists at the Geneva Conference and recognized the North Vietnamese government as a legitimate power and agreed to evacuate their forces and hold a vote after a certain period of time to determine under which government the country would be reunified. Emperor Bao Dai refused to sign the agreement, famously saying, "There is only one Vietnamese state; it is I!" The United States also refused to sign and it was clear that they would be the only support for the anti-communist Vietnamese. Emperor Bao Dai tried to make common cause with the Americans but the US would not have him. Less than a year later, working through his Prime Minister Ngo Dinh Diem, US agents helped arrange a rigged vote to depose the Emperor and make Diem President of the Republic of Vietnam. The monarchy may officially have ended in 1945 but the last traces were purged in that rigged vote and it all happened because of the French defeat at Dien Bien Phu 55 years ago today.
Posted by MadMonarchist at 12:11 AM