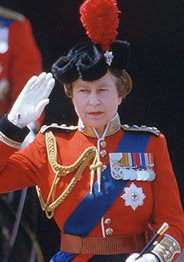 Today HRH Prince Harry of Wales is visiting New York City in his first official visit to the United States. He will be visiting "ground zero", talking with 9-11 families and then dedicating a garden in memory of the British subjects who were killed in the terrorist attack in 2001. Of course, all of the media coverage of this I have seen have made mention of the verbal gaffes of Prince Harry and his poor choice of costume at a fancy dress ball some time ago but sadly I have not heard any mention the Prince's service on the front lines of combat in Afghanistan. That, I think, should count for significantly more than a poor choice of words on occasion. It is to his great credit that while others talk a tough line about the War on Terror, Prince Harry has actually put his life on the line with the other British soldiers to keep his country safe. New York City and the US as a whole should feel honored that he has decided to make his first official royal trip for such a good reason.

However, while Prince Harry is fostering Anglo-American solidarity in the War on Terror the disgraceful French Republic is insulting the British monarch and the brave veterans of two countries. Perhaps someone should tell them the Hundred Years War is over. President Sarkozy has been planning the upcoming commemoration of the June 6, 1944 Allied invasion of Normandy; the first step in the liberation of France and the begining of the end of Hitler's "Festung Europa". He is reportedly eager to make this a Franco-American affair and get as much face time as he can alongside global super-star and self-styled "messiah" President Obama. However, he failed to invite HM Queen Elizabeth II; thus insulting not only the Queen herself but all of the WW2 veterans of the United Kingdom and Canada in one foul swoop. Why would the French show favoritism to Obama over HM the Queen? It is plain and simple pandering to the current fashionable trend of Obama worship.

It is worth remembering that Barry Obama was not a twinkle in his daddy's eye in World War II nor has he ever served his country in uniform. Queen Elizabeth II, on the other hand, did serve in uniform, with the British military, during World War II when the British Empire was fighting to liberate the seemingly ungrateful French from Nazi domination. It is a positively outrageous development and if President Obama had any sense of justice and gallantry he would refuse to attend if the Queen (head of state of the most faithful ally of his country) were not immediately invited along with the profuse apologies of Sarkozy. However, I will not hold my breath for that to happen as Obama's own prejudice against the British is well known. It seems the younger generation is willing to hog the limelight for themselves while slighting the Queen who is the only one among them who is actually a World War II veteran.

Down with the rotten republic and God Save the Queen!
Posted by MadMonarchist at 11:06 AM