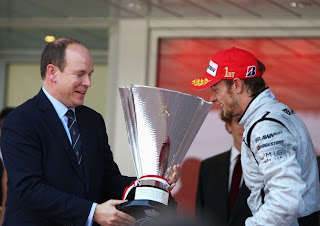 The roar of the engines has died down in the 67th Grand Prix de Monaco. The celebrations started with a charity soccer match in the Louis II Stadium. Prince Albert II himself took to the field to participate, supported by Princess Stephanie from the sidelines. The match was to benefit AMADE. For the main race it was a star-studded event as usual. Prince Albert II, girlfriend Charlene Wittstock, Andrea, Charlotte and Pierre Casiraghi were all on hand to watch and congratulate the winners. Also on sight was Elizabeth de Massy, Princess Beatrice of the UK and French Prime Minister Francois Fillon. Jenson Button of Britain took the top honors and was handed his trophy by the Reigning Prince. Andrea Casiraghi awarded the second place trophy to Rubens Barrichello of Brazil and the lovely Charlotte Casiraghi presented the third place award to Kimi Raikkonen of Finland. 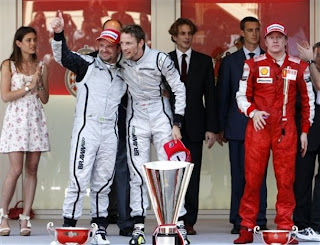 Tonight the glittering crowds are gathering for the F1 gala. So far Princess Caroline and Prince Ernst August have not attended any of the events surrounding this year's race but princely girlfriend Charlene and Charlotte will ensure that glamor is not absent from the festivities. 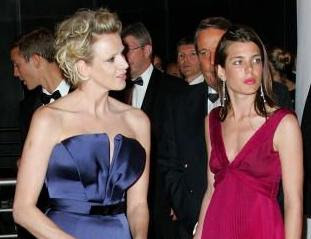 Posted by MadMonarchist at 7:40 PM