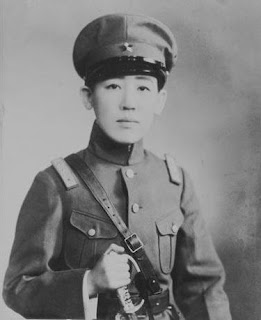 The woman known as Eastern Jewel was born in Peking in 1907 as Princess Aisin-Gioro Xianyu into the house of Prince Su of the Qing Imperial Dynasty. After the revolution toppled the Qing she was sent to be raised in Japan by a friend of her father's who was deeply involved in the pan-Asian movement. There she went by the name of Yoshiko Kawashima. When she was 17 she attempted suicide and began wearing men's clothing on occasion. This behavior is usually attributed to being raped by her foster-father, which would certainly explain a lot. She was later married off to the Inner Mongolian prince Ganjuurjab to foster ties between the Japanese, Mongols and the Manchu Imperial Dynasty. However, she was not happy there and soon divorced and fled Mongolia.

Eastern Jewel moved to Shanghai and there first became involved with the Japanese military as an espionage agent were her Qing dynasty connections with the upper echelons of Chinese, Mongol and Manchu society proved invaluable. Throughout her life she suffered from something of an identity crisis but the one thing that never wavered was her devotion to monarchism; be it her loyalty to the Emperor of Japan or her zeal to see the restoration of the Qing Imperial Dynasty of which she was a member. The last Emperor of China was her cousin and always welcomed her at his court-in-exile. She played a major role in persuading the last Emperor to go with the Japanese to Manchuria to establish the new monarchy of Manchukuo.

When open warfare broke out again between the Chinese and Japanese, Eastern Jewel, then going by the name of Kam Bik Fai, became an officer in the Manchukuo Imperial military and formed and led her own anti-guerilla cavalry force known as the Anguo Army. As she cleared bandits and red guerillas out of Manchuria, Eastern Jewel became a media sensation in Japan where she was known as the "Joan of Arc of Manchukuo". However, the media attention all but ruined her chances to return to the spy game which was a problem following her being wounded and unable to remain with her army. She opened a resteraunt in Tientsin as a front for Japanese espionage work and she was still there when the war ended and Japan surrendered. She tried to return to Japan but was captured by the Chinese republican forces and executed in 1948.