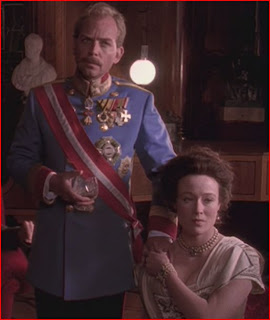 In "The Adventures of Young Indiana Jones: Adventures in the Secret Service" there is an appearance by Patrick Ryecart and Jennifer Ehle as Emperor Charles and Empress Zita of Austria. For those unfamiliar with the series, Sean Patrick Flannery plays a young Indiana Jones who joins the Belgian army during World War I. At one point he becomes a spy with the secret service and is given the task of escorting Prince Xavier and Prince Sixtus of Bourbon-Parma to meet with the Emperor of Austria in the hope of bringing a peaceful end to the First World War. I am glad to say that the Imperial couple are portrayed sympathetically as people who sincerely want peace and know better than to trust their scheming ministers to carry it out. Sci-fi fans will also recognize Christopher Lee as Graf von Czernin, a typically villainous part for him. This part of the Young Indiana Jones saga was last released in 1999.
Posted by MadMonarchist at 5:24 PM