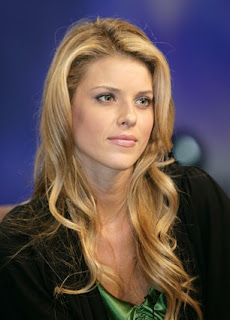 Since answering a question from a gay activist that her religion tells her that marriage is between a man and a woman Miss California Carrie Prejean lost the Miss USA crown and almost lost her Miss California title until pageant owner Donald Trump ruled in her favor. In the interim Prejean was attacked and slandered in the most vicious fashion as well as having "racy" photos of her publicized in an effort to discredit her as a Christian. I was on her side from the start for standing up for her beliefs instead of giving in to the tyranny of political correctness. When the photos came out I was not scandalized in the least for a number of reasons. First, the photos were pretty tame, it was under-handed how they were made public and even if they had been even more "racy" I don't care about what mistakes people have made, but what they are for now. Christians are supposed to forgive and never condemn people as being beyond redemption, there are others I could go into but this is not the time. What I find alarming is how this fits in with a world-wide trend that has been building up for some time now.

Carrie Prejean is attacked for giving her opinion against gay marriage. Queen Sofia of Spain has been criticized for the same reason (though usually, thankfully, with more tact). Now, it can be argued that this is totally different because royals (these days) are supposed to be non-political. However, where was the outrage when the same Queen said she did not approve of the Spanish tradition of bullfighting? Where is the outrage when the Prince of Wales speaks out about "climate change" and environmentalism. No one seems to object to royals speaking out on those political views. Yet, have someone speak out against gay marriage and suddenly they are vilified in the media. Why does the effort to silence only seem to go one way? It seems that if you have liberal opinions your freedom of speech is championed and upheld by everyone but if you have traditional opinions you will be met with efforts to silence you, discredit you and slander you. In other words, the modern idea of "free speech" seems to be a one-way street.
Posted by MadMonarchist at 8:28 PM