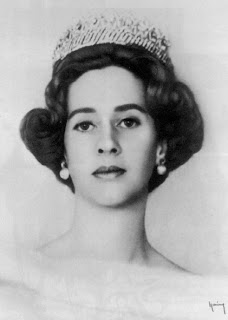 The Belgian government has just made public a letter sent to a Belgian newspaper last Tuesday which threatens the Dowager Queen Fabiola with assassination by crossbow. It is accepted that the letter was written by a lunatic, due to the rather archaic means of assasination threatened as well as the very poor quality of the French it was written in. The letter claims to come from the representative of a radical group but the authorities are uncertain as to how serious the threat is but, needless to say, they are investigating and taking no chances given the recent tragedy in the neighboring Netherlands and with the upcoming Belgian National Day. So far the Royal Palace has not commented on the threat. My own comment is that Queen Fabiola is one of the greatest queens in the world today, truly a jewel in the crown of Belgium and whoever is responsible for this threat should be dealt with using the utmost severity; where I come from that would be a few injections that would send the traitor to his eternal torment. In any event all should pray for the safety and long life of the great Queen Fabiola.
Posted by MadMonarchist at 2:36 PM