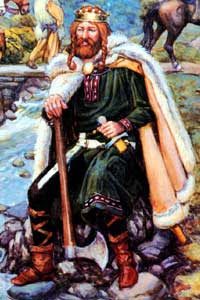 Brian Boru was the younger brother of King Mahon of Thomond in Ireland which was overrun by Danish Vikings in 951. When his brother made a deal with the Vikings Brian would have none of it and parted ways to wage a guerilla war against the invaders. His courage and example rallied many Irishmen to his cause and finally the support he gathered convinced his brother, King Mahon, to renew his war against the Vikings. Brian Boru won many victories over the Vikings, adopting their more advanced weapons for his own forces and then also made war on the Irish states that had allied with the Norsemen. In 1000 Brian won a spectacular victory at Glenmama valley in a dramatic display of tactical brilliance and using the terrain to his advantage. Within 2 years he was crowned High King of Ireland and in 1003 the states of Ulster and Connaught also pledged loyalty to him, causing some scholars and observers to refer to him as 'Emperor of the Irish'.
There was peace across a united Ireland for 10 years until the King of Leinster rose against him and incited the Vikings to launch another attack, making treaties with Viking chieftans from Norway, England and Denmark. Brian Boru assembled his loyal forces from across Ireland, gathering an army 20,000 strong. In 1014 on Palm Sunday the bay of Dublin filled with Viking ships and the fierce warriors moved ashore to attack on Good Friday. Brian Boru was 73 and wanted to lead his troops in the field but was finally persuaded to leave it to younger men. However, he gave his forces a stirring speech from horseback, holding a sword in one hand and a crucifix in the other. He sent his troops forward to meet the enemy and then returned to his tent to spend the battle praying for victory.
The Irishmen fought heroically, the tide swept the Viking ships out to sea, cutting off their retreat and after a long, hard day of brutal combat the invaders were beaten and the Irish were victorious. Many were lost, includng King Brian's son who was killed by a Norwegian chieftain. When told of the victory the High King sent his bodyguard to join the pursuit and finish off the enemy remnants while he returned to his prayers to thank God for the victory. A while later he heard someone enter the tent and assumed it to be his priest but it was a stray group of Viking warriors led by the chieftain Brodir who stabbed the elderly and unarmed High King to death.
Posted by MadMonarchist at 2:13 AM