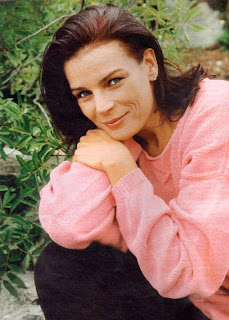 Today, Her Serene Highness Princess Stephanie of Monaco set down the first stone of the foundation for the "House of Life" in Carpentras, France which will serve as a haven for those suffering from the terrible disease of AIDS. Ever since the Princess learned how prevalent the disease was in her own country she has devoted herself to helping those suffering from the disease who are, all too often, treated as outcasts. The "House of Life" is being built by Fight AIDS Monaco of which Princess Stephanie is the founder and president. The center is scheduled for completion in the summer of 2010. The "House of Life" will have facilities to accomodate 28 adults and children and will complement the Fight AIDS Monaco headquarters in Monaco. I give Her Serene Highness a great deal of credit for her work in this area and I think she is, in a way, uniquely qualified for it. My experience has been that it is often those who have been, to varying degrees, ostracized, looked down on etc, who are most able to take to heart the needs of "the least of these" around them. God bless Princess Stephanie for all the great charitable work she does.
Posted by MadMonarchist at 8:22 PM