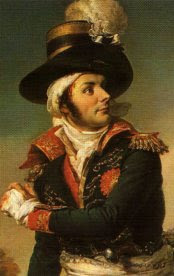 The French Revolution is rightly considered one of the pivotal events in world history and for monarchists there can be few events so especially horrific. However, as bad as revolutionary leaders like Marat and Robspierre were there were royalist counterrevolutionaries who were as noble and inspirational as their enemies were destructive. One of these heroes was Francois Charette de la Contrie a leader of the royalist uprising in the Vendee. An aristocrat who had served in the French navy during the American War for Independence he also defended Louis XVI and Marie Antoinette from the mob at the Tuileries. Following the outbreak of the French Revolution and the birth of the First Republic the people of the Vendee rose up in opposition to the revolutionary regime in 1793 and appealed to Charette for leadership. He was aware of the gravity of the situation and the odds against them but was persuaded and joined the mostly peasant army of Jacques Cathelineau, styled the "Grand Catholic and Royal Army" to fight the republican forces.

After the break-up of the initial campaign Charette led his forces in a guerilla campaign in the lower Vendee with numerous victories but was finally suppressed by a lack of munitions and was taken prisoner. However, he was soon back on the battlefield again in an aristocratic uprising launched with British support. He was given the rank of lieutenant general by the Comte d'Artois but refused to make common cause with the Orleanists because of their earlier collaboration with the revolutionaries. He finally met his final defeat at Quiberon where he was taken prisoner. Charette was then moved to Nantes where he was executed by firing squad in 1796. His bright but short career was over, yet he left a lasting legacy of principled loyalty to his God, his King and France and a family name and tradition that would live on long after him. A hundred years later another Charette followed in his footsteps fighting in the Papal Zouaves defending Pope Pius IX from the Italian nationalists.

Posted by MadMonarchist at 12:02 AM