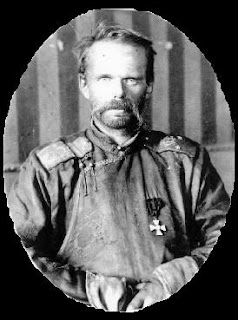 The White Russian general, pan monarchist and last Khan of Mongolia, Baron Roman von Ungern-Sternberg was born in Austria but grew up in Estonia as part of the Baltic-German aristocracy of the Russian Empire. He joined the Russian army in the war with Japan and was enthralled with the Far East. He served with great distinction in World War I and rose to the rank of major general. He fought with the White Russian forces in the civil war, particularly with General Grigory Semyonov, before going rogue with his Asiatic Cavalry Division of Trans-Baikal Cossacks, Buriats, various Mongols, Manchus and some Japanese gunners. He fought in Siberia with some support from Japan until 1920 and gained an increasing hatred of communist, revolutionary and republican factions and believed that their victory would mean the end of the world as he knew it. Monarchy was the answer and he dreamed of building a monarchist bulwark in the Far East by restoring the Mongol Khanate as well as the Qing dynasty in China from which he could strike out and destroy the Communist regimes and restore traditional monarchies.

In early 1921 the Baron invaded Mongolia and drove out the Chinese republican forces, liberating the Bogd Khan from captivity and restoring him to the throne. He then set his troops to work cleaning up Urga, installing modern lights, telephones, sanitation and so on. He sent letters to the exiled Emperor of China and to the Emperor of Japan asking for their support in his pan-monarchist coalition. He defeated several republican and communist incursions into Mongolia but was hampered by a lack of an industrial base and a steady reserve of manpower. By the summer he took his forces to attack Kiatkha which Soviet-backed Mongol communists had seized that spring. Unlike his earlier victory in Urga his forces were soundly defeated and barely managed to escape. His plan had been to rally traditionalists to his banner in Siberia, overthrow the Marxists and place the Grand Duke Michael on the throne as Tsar of Russia (he did not know the Grand Duke was already dead). That plan was dashed and while on his way to take refuge in Tibet a group of his soldiers mutinied but did not kill him. He was captured by the Soviets whose propaganda had portrayed him as the most vile criminal imaginable and after a show-trial he was executed on September 15, 1921.
Posted by MadMonarchist at 9:51 PM