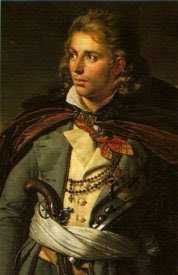 Jacques Cathelineau, known as the Saint of Anjou, was one of the leaders of the great royalist counterrevolution in the Vendee region of France. The revolutionaries like to speak of themselves as the champions of the "common man" against elitist tyranny and yet it was the common people who suffered most from their bloodlust and it was often common people who were prominent in fighting against the horrors of the revolution. Jacques Cathelineau was one of them. He was born in what is now Maine-et-Loire and he was a well known peddler or what we might call a travelling salesman in Anjou. He was known for being very physically strong, very handsome and popular but also extremely pious.

When the revolution broke out and the First Republic was established Cathelineau rallied a small, ragged army of peasants and waged a guerilla war against the revolutionaries. As time went on his strength grew and soon his forces were capturing villages and castles in some of the most fierce fighting. His troops fought out of loyalty to the monarchy and the Church and also out of righteous anger caused by the horrid, absolutely grissly atrocities committed by the republicans against the innocent people of the Vendee; including women, children, the elderly and even animals. They left nothing alive. Actions such as these, over time, prompted some of Cathelineau's men into reprisals but former salesman himself always behaved with the utmost gallantry.

As Cathelineau's successes grew he joined forces with other counterrevolutionary leaders and was ultimately made their commander as generalissimo of the Catholic and Royal Grand Army. However, Cathelineau put himself in great danger by the very bravery that so inspired his troops. In the summer of 1793 while he and his men were storming the city of Nantes the heroic general was shot down by a republican sniper. Without his leadership the royalists were defeated and soon they broke up into different factions. After the Bourbon restoration, in honor of the heroism and sacrifices of the "Saint of Anjou" the Cathelineau family was given noble rank. One of his grandsons served as an officer in the French Imperial Army during the Franco-German War of 1870.
Posted by MadMonarchist at 12:12 AM