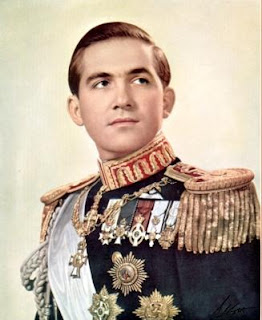 It was announced this morning on the former King's website that Constantine II will be undergoing a complicated heart surgery to replace a clogged valve with a bioprosthesis and single vessel bypass. The surgery became necessary after the cholesterol congestion began to prevent blood flow between the King's heart and lungs. Although described as a common procedure and an "elective surgery" it will nonetheless require the King to spend some time on life support in order that his heart and lungs may be stopped for the operation. King Constantine II has been one of the most prominent royals-in-exile in Europe after being overthrown in 1973. Since then he has continued to style himself as "King" but has not pushed for a restoration and as recently as last December said in an interview that genuine democracy was what Greece most needed to solve its current problems. Far be it for me to dispute His Majesty but I think he is needed just as much if not more.
Posted by MadMonarchist at 11:54 PM