Anniversary of the Red Fort 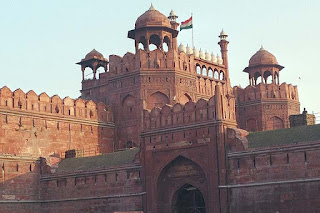 Today marks the anniversary of the completion of the famous Red Fort in Delhi, India in 1648. Originally called the 'Blessed Fort' it was built by the great Emperor Shah Jahan and was meant to be the crown jewel of his new capital city of Shahjahanabad which was to replace the former capital city of Agra. It remains one of the great monuments of the Mughal dynasty and a powerful symbol of the grandeur and glory of imperial India. It took roughly ten years to build the massive palace complex and imposing fortifications, the Delhi and Lahore Gates, the Rang Mahal where the Emperor kept his wives, the Pearl Mosque, and the massive "Life Bestowing Garden". The Red Fort of Delhi remained the seat of power and the most grand symbol of the Mughal Empire throughout the years of its height and slow decline. The last Mughal Emperor, Bahadur Shah II lived there until the great Sepoy Mutiny of 1857. The Emperor was liberated by the rebels, proclaimed the ruler of a free India but was eventually captured by the British, who defeated the uprising and the aged monarch was brought back to the Red Fort as a criminal for trial. Nonetheless, the symbolism of the Red Fort remained constant. The British used it as their military headquarters during the period of the British Empire of India and when India became independent the occasion was marked by the raising of the national flag over the Red Fort by Prime Minister Nehru. To this day the political leaders of India make use of the Red Fort as a powerful backdrop to address the nation on independence day.