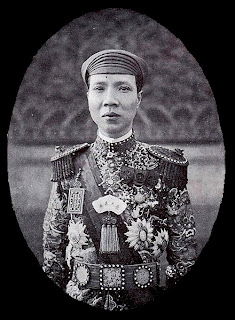 Emperor Khai Dinh of Vietnam is another one of those royal characters whose reputations have suffered unjustly as a result of ignorance and outright lies repeated so often as to be taken as fact. The son of Emperor Dong Khanh who maintained a policy of peaceful cooperation with the French (and who first established religious freedom for Christians) he did not succeed his father but was called to the throne when the two previous monarchs were removed; the first on the grounds of insanity and his son for plotting a rebellion against the French protectorate. Khai Dinh ascended the Golden Throne in 1916 in very difficult circumstances. His young predecessor was very popular for having defied the French but Khai Dinh was convinced that such rebellion would be disastrous. The French kept Vietnam stable and protected, kept the monarchy in place and he felt that any rebellion would only lead to defeat and much death whereas a spirit of willing cooperation would earn the Viets respect and greater autonomy for their country.
His reign name meant "Auger of Peace and Stability" and this is what he wanted most of all. After the chaotic preceeding years he wanted to shore up the stability, dignity and respect of the Nguyen dynasty monarchy. The French Resident Superior was a close friend of his and although he was vilified by many as a collaborator and "salaried clerk" of the French by Vietnamese revolutionaries he was sure that his was the more beneficial if less popular path to take. Yet, despite some signs that things were going his way Emperor Khai Dinh was truly at a loss that the French refused to extent greater autonomy toward his government. People grew restless, opposition groups grew and many blamed the Emperor. The situation was not helped by the fact that revolutionaries captured by the French were always executed in his name. Some French even complained that he was not cooperative enough. At one point in 1920 Khai Dinh was so disgusted he spoke of abdicating but the French would not allow it. It seemed his time had passed and hopes on both sides were invested in his son Crown Prince Nguyen Vinh Thuy.
Emperor Khai Dinh was known as a very peaceful, kind and compassionate man. His enemies accused him of living a life of luxury while the people suffered but in reality he opposed the French tax increases and his court was allowed less money than even the court of Cambodia. He was a devout Buddhist but when he was very ill (as he often was) he asked one of his Christian mandarins to go and pray for him at the shrine of Our Lady of Lavang. The mandarin went and prayed for his Emperor and Khai Dinh recovered and had a greater respect for Christianity thereafter. His reign had been one of peace and the general progress that goes with it yet his reputation remains one of the forgotten victims of the ultimate Communist victory. Emperor Khai Dinh died in 1925 and his magnificent tomb, one of the wonders of the Imperial City of Hue, is a true reflection of the monarch being a quite beautiful combination of French and Vietnamese architectural styles sometimes known as "Norman Pagoda". He was succeeded by his son who was to go down in history as the last Emperor of Vietnam.
Posted by MadMonarchist at 12:31 AM