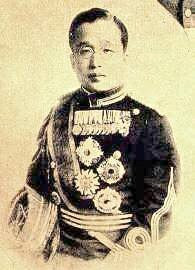 Recently the world collectively spit milk out their nose when the communist regime in North Korea carried out underground testing of a nuclear warhead roughly equivalent to the atomic bombs used against Japan at the end of World War II. Even Russia and China were outraged, the US has demanded enforcement of previous UN agreements and Japan is actually raising the subject of its own deterrent. The leaders of the world have a problem on their hands but it should be remembered that all of this might have been avoided if the victorious WW2 Allies had restored the House of Yi to their traditional place on the Korean throne.

Obviously the communists who were sponsored by the Soviets in the north would not have gone along with this but preventing the Soviets from having a sphere of influence in Korea at all would have been ideal (they were kept out of Japan thanks to MacArthur) but a return to monarchy was at least considered as a possibility in the south because President Syngman Rhee suppressed the former dynasty because he was afraid that they might be restored and he considered them a threat to his power. However, such a restoration may have helped in the reunification of the country based on the concept of legitimate authority. Prior to becoming part of the Empire of Japan there is no doubt that the last, legitimate government for all of Korea was the Yi monarchy and calling upon this history and the traditional monarchial establishment might have been able to unite all Koreans via their shared history rather than subjecting them to the communist-capitalist divisions of the western world concept of politics.

If, for example, Crown Prince Euimin had been restored in Seoul as King or Emperor of Korea they could have used the weapons of shared history and Korean nationalism to combat the communist revolutionaries. Would it not have been at least possible that a campaign led by the Crown Prince to reject both foreign republican models in favor of the traditional Korean political system would have been more successful in undermining the communist campaign and keeping Korea united? If such wisdom had been shown the ill-effects of the Cold War and the north-south division and war might have been avoided and the world would never have been faced with the dangerous situation before us today.

Posted by MadMonarchist at 5:30 AM