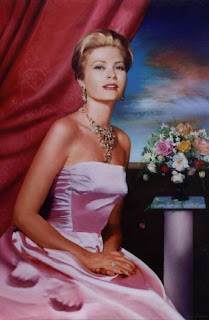 One of the most well known and beloved royal consorts of the last century was certainly Her Serene Highness Princess Grace of Monaco. She was already a well established, world famous Oscar-winning actress when she married HSH Prince Rainier III who was in need of a good wife to produce an heir to the throne and ensure the continued independence of his country. Grace Kelly was born into a prominent Irish-American family in 1929 and was, surprisingly, considered something of an ugly-duckling in her youth. Her parents were very devout Catholics and they often clashed with their strong-willed daughter when she got into show business and was prone to become infatuated with her leading men. However, her parents kept her on the right path and she had been raised well enough for outright defiance of their wishes to be unthinkable. She starred alongside some of the most famous names in the golden age of Hollywood and won her Oscar for the excellent film "The Country Girl" of 1954 with Bing Crosby and Bill Holden. Her last film was "High Society" which also starred Bing Crosby, Louis Armstrong and Mr. Frank Sinatra.

After a whirlwind courtship she married Prince Rainier III of Monaco on April 18, 1956 and in the following years gave the prince 3 children; Princess Caroline, Prince Albert and Princess Stephanie. She had some trouble giving up her career and adapting to life as a princess but to her credit she never let it show and always seemed the perfect consort and royal wife and mother. The marriage put Monaco on the map in many ways and a wave of fascination with the tiny Guelf enclave swept the USA who viewed the Monegasque Princely Family as partly their own forever after. Princess Grace was a great patroness of many charitable causes as well as being a tireless supporter for the performing arts. From her official duties to her tireless (and at times very stressful) support of her children and her style that was classy and conservative she seemed to set the bar for the ideal princess consort. 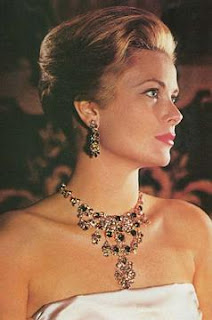 Toward the end of her life Princess Grace complained of frequent headaches. Many attributed it to stress, particularly to her rebellious daughters, Stephanie most especially, but these were probably mini-strokes. In 1982 while driving herself and Princess Stephanie back to Monaco from their country home Princess Grace had a massive stroke which caused a car crash. Stephanie was badly injured and Princess Grace died. Her funeral was star-studded and she left fairly well beloved by the whole world but her family would never be the same again. Prince Rainier III never remarried as some thought he would. When pressed on the subject he would point to Grace's portrait and say, 'who could ever take her place?' Rainier believed that match had been divinely arranged. Prior to meeting Grace he had gone on pilgrimage to Lourdes to pray for a good wife. Hardly a year later he married Princess Grace who later mentioned to the family confessor that at the age of 12 at her confirmation she had taken St Bernadette, the visionary of Lourdes, as her patron saint.