The Pope & Royals in the Mideast 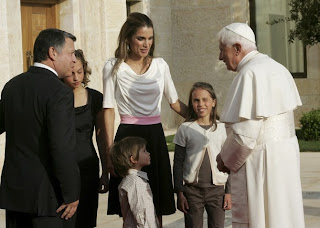 The visit of Pope Benedict XVI to the Middle East has come to a close and one of the most commented on aspects was his visit with the Jordanian Royal Family. Throughout his trip the Pope made all the expected comments calling for inter-faith dialogue, peaceful coexistence between the religions, solidarity with the Christian community, sympathy for the past sufferings of the Jews and solidarity with the Palestinians (as the Syrians in Israel like to call themselves). On the whole he probably impressed more Muslims than Jews with the visit but even then I doubt he won any converts (so to speak) amongst the Muslim community. The problem is that the Muslims most in need of his message are the ones most assured not to be listening to him. From Queen Rania's extensive coverage of the visit it seems the Pope was a big hit with Her Majesty, but of course Queen Rania is a very kind, tolerant and modern-minded woman and the Kingdom of Jordan as a whole probably stands above all other countries in the region for being stable, peaceful and open. Jordan, along with most of the Gulf states, serve as examples of the benefits of monarchy compared to the plight of republics like Lebanon, Syria, Iraq and Yemen.

I leave out the State of Israel because the problems there have very little (if anything) to do with the form of the government. Saudi Arabia is also a rather unique case but even in that case I would prefer to see the House of Saud maintain their position given that the only thing likely to replace it would be a theocratic republic in the mold of Iran. Everyone knows the Pope is going to advocate for peace, dialogue and tearing down the security wall, which is good to push for the ideal, but I cannot help but being pessimistic as to how realistic such 'reaching out' is. I won't go into the whole mess, but I think that Islam as a whole, especially the radical elements, know that such calls for peace on the part of Christians are coming from a position of weakness, and there really can be no denying that. Muslims have now surpassed Christians in number around the world and Islam is the fastest growing religion in Europe and Canada. Muslims also have the advantage of having a very clear world-vision to advance alongside their religion whereas the "Christian" world has mostly abandoned its own culture as well as its religion and for the most part those elements that are left are not working together. However, monarchy should not be forgotten amongst the turmoil because history has shown, including such cases as Iraq, Afghanistan and Iran, that stemming the tide of radical Islam must go hand-in-hand with defending the Islamic monarchies. That holds true even in Saudi Arabia where the government seems to be pushing a brand of fundamentalist Islam that often comes back to bite the hand that feeds them as in the case of Osama bin Laden.

The King and Queen of Jordan represent about the best that the modern Islamic world has to offer. Pope Benedict XVI represents (I think) the best of traditional, Christian Europe. The problem is that not too many people seem to be following these examples in the Muslim or Christian worlds.
Posted by MadMonarchist at 12:13 AM