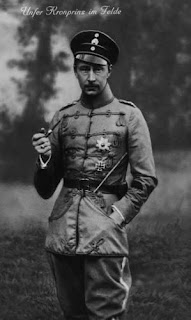 During the First World War probably few army commanders were as ridiculed as the German Crown Prince Wilhelm III. He was tall, thin, had a rather relaxed demeanor and long neck that cartoonists on the Allied side had a field day with. He was portrayed as a dandy, a playboy who owed his rank solely to his birth and did nothing but drive around tossing cigarettes and iron crosses to his soldiers. All of this is quite unfair to the late Crown Prince. In virtually every case the exaggerated portrait of him is entirely false. Some viewed him as a villain of an even darker shade than the Kaiser. This was certainly not true. He had been associated growing up with the hard right in German politics but the Crown Prince was no warmonger. In fact, when war broke out in 1914 he called it, "the most stupid, senseless and unecessary war of modern times".

The Crown Prince was given command of the German 5th army on the western front and, despite what many now think, he was a capable battlefield commander. He earned high marks for his leadership in the Ardennes during the initial German invasion and, while he may not have been a military genius, he was certainly capable, worthy of his rank and undeserving of the ridicule he was and is subjected to. In early 1916 his forces led the offensive against Verdun for which he has often also been much and unjustly criticized. Wilhelm had put forward a reasonable plan to take the city but his superior, General Erich von Falkenhayn, rejected it because he did not so much want to take Verdun as to bleed the French army. After 2 months of this butchery the Crown Prince tried to convince the high command to call off the offensive but, again, he was ignored.

In the fall of 1916 he was given command of his own army group (aptly named 'Army Group Crown Prince') which consisted of 3 armies in the center of the western front. By 1917 the Crown Prince could see that the war was going to destroy victor and vanquished alike no matter who they might be and he began to speak out in favor of ending the war as things stood. His forces won a great victory at the Aisne in 1918 but Wilhelm could see that Germany did not have the strength to continue and that they would be overwhelmed by the Allies. He advised retreat but yet again the high command would hear of no such thing.

When the war finally did end with the armistice and the abdication of the Kaiser the Crown Prince requested to return home with his troops but the republican government refused. He went into exile in Holland as his father did. He was allowed to return to Germany in 1923 and continued to support the restoration of the Hohenzollerns but it never came to be. He died in Hechingen in 1951 of a heart attack.
Posted by MadMonarchist at 12:49 AM